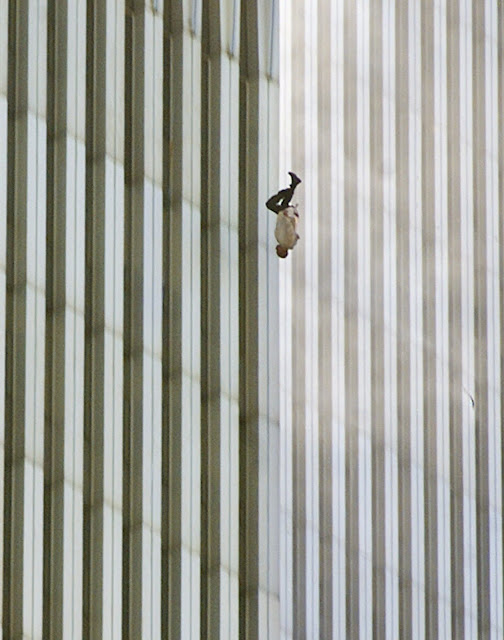 9/11/2113
All,
Osama Bin Laden is still dead and it really means nothing to me. I do not believe that his death was worth any single life let alone many lives that were brutally shed in a ruthless war against terror. Terror indeed. The people of Iraq know of terror. First under the dictator that was uninstalled by the USA and then by the USA rescuing it. I remember when we rescued Iraq the first time. I am going to college with these fresh minds coming out of high school and trying to cram books from the 70s into their fragile little minds. I wrote a book once, in a competition, and I don’t think anyone has actually read it, and that is OK. It was not written for the people. It was written for the cockroach people.
I did not write anything of significance the last 11th. I probably wrote a status update, and was sad, and brooded on a national defeat at the hands of an old man masturbating in Pakistan. I say defeat, because I feel defeated. This day makes me tired because it exposes the worst in people, because they do not know how to react to it, and they have forgotten, despite what they may say, just how terrible it actually was. That night, I spoke with a friend Rashad, and he said that this sort of thing happened every day in Palestine. And I disagreed for a number of reasons, most importantly the utter lack of 110 story buildings.

I was in a very bad place in my life, at the time. In a bad way. Unemployed, in crippling debt, and generally making bad decisions. One night, after a particularly bad evening, I took a walk to the battery, below the Twin Towers. That they should be reduced only to film and our memory is a terror that will never go away. They were marvels of engineering. I had vertigo just looking up at them. Like all great things, you have to pay to go to the top, and I did not have the $1.50 for a metro-pass. So I looked up at them and then I walked home. And then I kept walking. Until I was at the other end of the island. Then I went home and that was the last time I would ever see those buildings.

It is not cool to talk about. Jesse made the comment soon after I had returned to Bemidji that it was some sort of badge of honor. But I did nothing. I believed then, as I do to this day, that the entire area would be toxic. The call for blood went out and then swiftly ended. There were no survivors. Just people ripping apart concrete and iron until their hands bled. I had said to the ladies upstairs that if I were a lunatic terrorist, I would pack my luggage so full of Anthrax that anyone exposed to the debris was a dead person. They asked what Anthrax was and I told them “Wait”. It was my only piece of prophesy that day. The island was closed. There was no escape. Joe brought over “Escape from N.Y.” which I had never seen. I do not think that Snake could land on the Freedom Tower.

But at least it is up. At least it is not the hole. I would see the hole in 2002. The DMV was near it. I do not like the term Ground Zero. This is a military term, at best. But there are no protocols for grief on a national level, I guess. Or parachutes. Or helicopters that could land. Or Spiderman. Who had captured a helicopter only a month before. Or Superman. Or Jesus. Or Alah. No one to catch those poor people. But it probably still beats being gassed. I would rather leap from a building and take my chances with gravity than be nerve gassed to death. But the nice thing is, apparently I don’t like Syria. Or Syrians. Because 2,000 American lives are worth any 100,000 others.

For these 2,000 lives, you must be dying in the millions. With no hope. Then we may consider mobilizing the full power of the most powerful military ever created to first level your nation with fire and explosive and then (maybe) rebuild everything before gracefully withdrawing. Being withdrawn from by the USA is a dignified and glorious thing and one day maybe Germany and Japan can tell you what it is like. If they ever shake us off their case with quality automobiles and awesome video games. But the reality, grim/terrible/dark, is that the USA is done with it. Build your own damned nation. Our missiles are expensive and your dictators protected by international law. You will be gassed, so that millions more can watch different TV. Better TV. With less commercials we have to forward through.

Can we just declare a victory against terror and stop killing people? Everyone just stop with the killing? Already? Are we not civilized enough not to stockpile and use vast quantities of guns to subjugate and terrorize the known world? What will that take? I am asking nicely. Many others are out there praying to their alien Gods. But the Gods will not sort this out for us. The Gods are angry, kids, and bored. That is the worst. The worst of all my revelations is that, when I yell up at the night sky to the Time Craft for emergency extraction, nothing comes. And this tells me one of two things; 1. I will never seal the deal on the time machine. And 2. Humanity will never invent a time machine. Or if they did, there is a reason they are not accepting my requests. This is a grim future filled with darkness indeed.

I am done now. These are the many things I want to say. And I feel better now, somewhat. That is all this is. This is catharsis. If it were art, you would be entertained. I don’t want to believe that the terrorists won, but they are forcing old people to take off their shoes at the air port. After the shoe bomber. Then there was an underwear bomber. Just what is the TSA there for, if not to inspire terror? Counter-terror is only terror to a different group, in this case everyone. Try wearing a fez to an airport and tell me you don’t feel a little terror? Creeping up on you? Then there is the looming understanding that we are all going to die. Billions and billions of dead people. And I am nowhere along on my recycled casket proposal. And there you all are. All dozen or so of you who actually read my shit when I spit it. Bless you. Quetzoquaddle be with you, you darlings. I am just over here, feeling fat and sassy, and needing to vent all this terror before I break into a billion pieces.
1 ∞ <3
Q
What the hell is a "Q Report"?
Who wrote this dreck?

Tommi L. Godwin said…
I always enjoy reading your work. good stuff, man. glad you are around and courageous enough to put such things into writing. the "war" on "terror" hurts my heart. It's encouraging to know I'm not alone.
Wednesday, September 11, 2013 at 7:06:00 PM PDT

QP Quaddle said…
Thanks so much, Tommi! Really appreciate it. You are the first human I have had comment on my blog in maybe a year or more. Fucking robots, you know?
Thursday, September 12, 2013 at 2:11:00 PM PDT