The Hills Are Silent With Eyes.

We did not watch The Sound of Music. We did not care to endorse the idea that an American Idol had any business on stage. Even though we strive not to judge, we cannot help but believe that national karaoke is destroying art wholesale. How the masses gorge themselves on this mediocrity is a savage indictment of our culture. We did watch the fallout, though. Of doing something once that thousands do daily. It is as inane as the performance must have been. For thousands of reasons that are being ignored, by large, by the media. But that is why we are here. To free the mindslaves. Unshackle your own minds, gentle reader. As we explore, in brief, the unpleasant state of affairs in which we find ourselves. For ours is to shape the future, and so we must criticize the future. Or we are not going to get anywhere.

Carrie Underwood is a monster. Just kidding. JK, kids. To use the vernacular. She is an adorable performer who won a contest once. Then she went a step further and made a career for herself. And this is the beginning of The Hunger Games.  The premise is actually quite similar. Forgive us, for indulging a certain dystopian future. In this eventuality, poverty is rampant. The ability to survive, to be able to feed and shelter yourself, to insure yourself as a mandate of the state, to clothe yourself and to move freely about, you must have money. Thousands and thousands of dollars. In a world where most make only dozens and dozens through their daily efforts. Cleaning toilets and selling cheap food. But if you are lucky, and willing to undergo the criticism of the super rich, and are pretty, and are young. Then YOU may very well be the next American Idol. But probably not.

Probably you will be forced to root through the trash to eat. Which, considering the vast waste inherent to our failed values, is a literal cornucopia of mildly expired foodstuffs. The people are starving Mr. President.

Then let them eat trash.

And we do. Oh how we do. Fist after fist shoveling trash into every orifice that will accept it. Trash for our mouths, delicious and sugary, savory and salty, fantastically fried, and we will all of us get diabetes. Until they find a cure. For surely the diabetic supply companies are investing themselves in a cure. Surely we can start growing new hearts, any day now? And this will be readily available to the public at large. Surely if they gave that fascist Dick Cheney a heart they will get one for our babies? Our precious little babies.

We shove trash into our ears in a variety of novel forms. One of them is Carrie Underwood. Another is listening to a vampire impersonator whose name we see no need to remember attempt to sing. Why the Phantom allowed any of this to happen is beyond us. Obviously he is contented in the sequel we DVRed and then forgot about. The real trash are the advertisements for things we cannot possibly afford. Oh look, a $50,000 car. Well. Wouldn’t that be a great way to get to the job we don’t have? The person driving to work on a Tuesday in their already excellent car  says to themselves; You know what we need? A newer car. This one is already two years old.

We shove trash into our eyes every time we turn on the television. Ours is the perpetual quest to find trash that is new. New trash to watch. We must support the struggling members of Hollywood and the great members of cable and satellite based communications. Soon we will be forced to give THEM our hard earned change as they beg on our corners. Look, dear, it’s George Clooney. Give him a dollar, he looks so very hungry. And that is the real game. The game to stay alive isn’t a well produced affair that incorporates the finest points of live and recorded television technology. It is not fusing this technology with that of combat weaponry, ancient and modern in a battle for the sake of amusement that destroys us. It is separating these two things so that, while people starve and explode we instead can choose the tastier trash to occupy our holes.

It is a vile and harsh indictment of the whole failed contraption, but the cruelty is in the truth. Rodney King is dead, but the footage of getting cruelly beaten will live forever. We had hoped, above all hope, that the absurd proliferation of camera ready cell phones would have ended the injustices of our police state, as well as the horrors of our lawless aberrations. If you can capture a crime, digitally, then what incentive is there to a criminal to complete the crime? Or avoid capture? Maybe you should not pepper spray peacefully protesting students in the face holes? But maybe you should. Because it is actually more profitable than protesting.

We don’t want to protest anymore. We do not believe it will effect change. We believe that if we began coordinating massive corporate shut downs and employee strikes that we would be assassinated by big oil, or whoever, and the justice system is being managed by liars and thieves. The idea of infallible rulers in any given republic, those who can set aside their interests, those of their family, and their legacy, for the greater good, is and probably will be the logical fallacy that unravels the planet. It is a theory that is indoctrinate by the educational systems controlled and endorsed by this august body. So why would they ever let us believe that they are simply taking our money, as well as that of any number of special interests, and doing as little as possible so as to remain in office? I guess we do, though.

All this from Carrie Underwood. Whoever that is. The final point is not about society, or government, or art, but in specific theater arts. Because we feel we can talk about this art with relative certainty. The certainty is this; theater is dead. Carrie Underwood killed it. She did not do it alone. There were producers, and directors, and others to be sure, who helped. The road is long, and begins in the caves of pre-human. Describing the details of their righteous hunt with props and light. They will tell you it was the Greeks, but it was not. That is just what they want you to believe. The road ends on live television. Where the magic and majesty of the living stage was laid bare as a corpse on a table, and dissected for posterity. 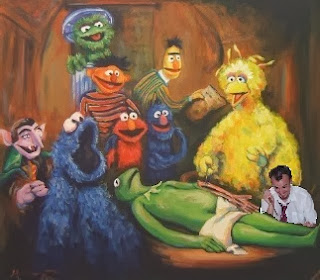