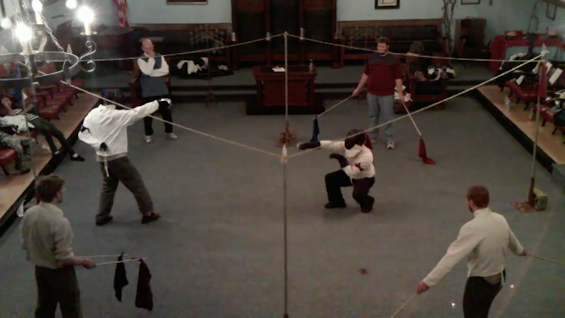 Re: The Last Days of Trump.

It’s me, your favorite swashbuckling secret agent! I hope you are all doing well and remain on mission. Despite what may appear to be ongoing world shattering crisis, our numbers are indicating they are necessary steps towards a greater universe. Before we can move forward on this timephone report, we must go back to the beginning of something. By way of abridging the timeline we will begin with the birth of The Guild and of secret agent Q. Codename Q.

The Bemidji Swashbucklers Guild (BSG, The Guild, Guild) was incorporated 4/18/2006 as a 501-c(3) non-profit educational secret society. It remains the only legitimate paper trail for an organization that has otherwise remained entirely beneath the radar of global intelligence agencies, arts magazines/enthusiasts, and/or internet searches writ large. This was always the goal. The only formative and participatory body is the Shadow Council, the five Agents of the Original Houses; Katana, Rapier, Broadsword, Cloak & Dagger, and Zweihänder. In researching the tactics to maintaining a secret organization agents have infiltrated other secret societies including (but not limited to) the Freemasons, Shriners, Elks, Eagles, and the Fraternal Order of the Jackelope. Our intelligence efforts experienced predictable results. None of those other secret societies had a fraction of our success in remaining secret. There are all sorts of books on those other (lesser) organizations. A secret society remains off the radar by avoiding the press. By concealing operations and goals. By gathering intelligence, science, and art before synthesizing and analyzing this information. How it does NOT succeed is by over exerting influence in any one direction, so as to go above said radar.

Moving forward into the many different disciplines of arts and sciences it is notable to mention that we only ever meant to be a secret agent in literature. Speculative Fiction, at best. Any actual deployment of tactical misinformation and/or cyberprophecy are the unfortunate byproduct of moving outside parameters and/or outside misappropriation. When you send ideas into the universe they are allowed to grow. The gardener does not plant the seed knowing if they will grow, only hoping that what should be will be. But also sometimes you grow poison. Poison all over the place. Oopsie Daisies. It occurred to me that there needed to be something written down about Donald Trump, on this anniversary of the gross final days of his awful presidency. Hunter S. Thompson is dead, my friends (as disco). But in his place I would like to think the Gonzo method is a reliable angle of attack in these weirdening days. So as we have built credentials, made our claim, staked our place/planted our feet in this place and at this time, allow me to memorialize and criticize for one last time this troglodyte POTUS.

New York City is a miraculous metropolis. The towering buildings are thrown into the sky everywhere, over parks and rivers, and people are stacked like rumbling bees on top of one another for miles and miles and miles. When I stood beneath the Twin Towers for the first time and gazed upward I sensed an impossible vertigo as I attempted to comprehend looking 110 stories into the air at something so impossibly high. I remember looking out, over the observation deck of the Empire State Building. Knowing the things this structure had witnessed and survived.

I remember standing below Trump Tower for the first time at Columbus Circle. One of the very few circles in the city, cars drive around a circle next to the southwest corner of Central Park (remember the Maine Memorial), Trump Tower, Starbucks, and others. I saw Kevin Bacon and John Ritter in that Starbucks. Trump Tower is big and gaudy and awful and we could never possibly afford to live there. A little research into how the Trump family gained their money shows that it was by buying out poor people and then charging poor people while discriminating against them. The end result of which are a group of buildings in Harlem referred to as The Projects, rent controlled towers of humanity relocated in order to super-convenience the wealthiest among us. I can go my entire remainder of life without watching The Apprentice and die a happy person. That is not a need that exists within me. Rather, I work against the idea that Trump was ever brought into the light of celebrity. Gross. How society didn’t veto him then and there is a testament to entropy, systemic decline, and further evidence that if God isn’t dead then they certainly aren’t helping anymore. Perhaps they are sick? Surely if we were created in their image God would eventually die? Maybe the constant explosion/implosion of creation is simply a kind of galactic The Apprentice and ours is simply one of an infinite amount of realities, vying for our chance at $30,000. Most of which involves discounts and/or gift cards.

To be entirely honest, I grow tired of beating on Trump. Oh, we have had fun along the way. For those of us who still bear grudges against George W. Bush, moving forward from Donald J. Trump is going to be a difficult endeavor. I would be curious to see the body counts, respectively. See what the totals are foreign versus domestic. Assign some dollar values to the abject inhumanity of it all. Bathe in the statistical horror. Shower. Start to analyze the data some more. Continue to suck the chrome from our .22 suicide revolver while blaring “Goodbye Horses” by Q Lazarus through soundproof headphones. No no. Don’t cry too loudly. Shhhh. You’ll wake the cobras. It’s really amazing to think about the things we are as a society expected to forgive of our leaders and their murderous habits.

At some level the people you murder are so distanced from any level of culpability that there isn’t a reason not to kill them. When you consider the amazing amount of jobs you create, incarcerating, punishing, rehabilitating, and funeral rehoming criminals? The school to pauper-grave pipeline is the shortest than it has ever been. The other day 5 people died during a riot at the Capitol Building but in reality Trump killed something closer to 4,000 that day. Because not wearing a mask to prevent the spread of a deadly disease is a clear violation of our constitutional right to die idiots. SHALL NOT BE INFRINGED. There. You need to put at least one all caps one of those in a piece if you want to get that ‘people with guns’ readership. I kid, I kid. Most of our readers are actually in Hong Kong for whatever reason. At least their robots have an impeccable sense of taste. We truly thank them for their unwavering commitment to our dread truths.

What will happen to Trump, when he leaves office? What indeed? And what is the function of a timephone report, if not to explain? For that we have to go back to Inauguration Day, 2021. The streets and highways of DC were loaded with more Federal troops than Iraq, Syria, and Afghanistan combined. Which was a rare occasion indeed. Tens of thousands of heavily armored troops, armed, starved, infected. Ready to gas seditionists and bayonet QAnons. Oh, the QAnon Shaman had gotten the drop on Capital Police, but this time things would be very different. This time, there would be little to no fucking around. Morning. Trump boards Airforce One bound for Mar-a-Lago. Wheels up and golf by noon is his plan.

Meanwhile Joe Biden and Kamala Harris are armed to the teeth, snorting lines of Bolivian Marching Powder from a nearby riot shield. Bowser has instituted a rare unilateral moratorium on enforcing drug laws and with so many overworked interns around it was a short degree of Bacon to get upper levels of government drugged out of their gourds on amphetamines, depressants, and hallucinogens, in no particular order or quantity. It seemed like a great idea at the time, a sort of Postmodern Age of Aquarius, but then things began to quickly unravel. By afternoon no one could keep to the schedule, and instead of normalcy live cameras were trained at empty platforms. Then the sniper fire. Then the fire at will. Then the reloading. Lots of screams. Food shortages.

Meanwhile, Trump lands at Florida and the FBI is there (obviously) and some federal marshals and some members of the Russian mafia and several camera crews. Trump is forced to disembark the plane by the crew who are brandishing yard-long cattle prods. The receiving party opens up a little and it is explained (briefly) that they are going to close their eyes and count to 100 to give him a sporting chance. Trump considers running and instead decides to use a brisk walk. He only manages to get as far as the terminal before the arresting team is done counting and begins running. But then the helicopter shows up with the suppressing fire and what was supposed to be a fun way to let an old man have some hope before he goes away to federal prison for the rest of his golden years, it’s a Nicholas Cage worthy Michael Bay helicopter extraction. Trump manages to grab onto a rope ladder and the helicopter takes off into the sky, firing off a few parting bursts to dissuade return fire. But then Trump loses his grip and tumbles from a few hundred feet up and we see him tumble. Tumble and tumble through the air like a buffoonish seal that has wandered off of the wrong waterfall. A sound like a bag of cement striking pavement and it is all over.

Of course this is not what happens. We all know that drugs are illegal. Donald Trump would never get a head start or briskly walk. This is mere fantasia; the heady kaleidoscope of our darkest speculations. My only parting wish is that I don’t have to hear about him anymore. People will stop giving him energy and time and that energy and time will be better spent doing other things. Virtually any other thing. Whatever happens, happened, or will happen, remain true to yourself, to the mission, and to the truth itself. May it never wander. What a wild four years. What a wild eleven more. Stay weird, kids.

Did you enjoy this Q Report? Why not read another?

Who is writing this crazy shit?

What if I'm a robot?