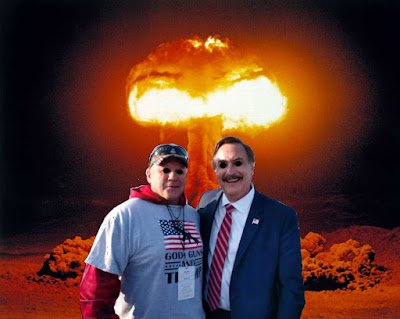 Re: The Pillow Guy.

What an asshole. I hate to start off any writing (especially a time report) with obscenities. I make a real effort to build up to the obscenity. Naturally. Progressively. A traditional climactic build of righteous indignation and then we open payload doors and release the F Bombs. But. Fuck Mike Lindell (the pillow guy). He is such a pants-shitting moron that I feel the need to front load the fact that this guy is a douche canoe. A craven grifter. A vile fiend. So if there are any illusions about this report somehow platforming him, allow me to dissolve those now. Any platform I put Lindell on would have a trap door.

Why the hate? Let’s start with how idiotic a pillow magnate is. How absurd. Only in the ever-declining 21st century United States of America could a person with the intelligence of a failed umbrella rise to become the greatest pillow salesman in history. And also somehow that matters? Horatio Alger is burning in hell and here we are, left to sift through the rubble of The American Dream, searching for a crumb of genetic material we can submit for an insurance settlement. Those crass fucks.

It became obvious that we had to pillow fight to the death. Which is of course very hard to do, typically. First, you have to lure the person into the fight itself. Lindell was a hard person to find, after the trillion dollar lawsuits dropped. But I am also a hard person to find because I’m the greatest secret agent in history. Eventually someone from Broadsword tracked him down, living in a container home near Hibbing. After some bullying and threats against pets it was agreed we would fight to the death, provided our next of kin got half the proceeds and 0% went to charity.

The whole thing went down at The S Center in Bemidji. They brought in the Olympics AV alternates to pay-per-view it and although I’m told we lost money I’m still not sure how. But it’s also something so chronic to any production I’m near that it’s become normalized the same way that filling a goose down pillow with syringes full of pufferfish toxin is normal (within the paradigm of a pillow fight to the death being broadcast live to at least 1 billion people).

The original plan had been to hold the thing on an abandoned oil rig pulled out to international waters, but that was actually going to be a huge hassle. Especially without working with Elon Musk and I have a longstanding blood feud with that dude owing to a not insubstantial amount of money involving certain rights that cannot be mentioned due to ongoing investigations. Even now! 100 years after most of this weird shit went down. That’s law for you. Enough money will grind the wheels of justice if not to a halt, then at least to a glacial crawl. Remember glaciers?

People in the USA go through their entire lives believing they live in a great nation, founded by geniuses, that remains the bright center to our global village. We are that golden city on the hill where everyone is equal and free and speech is protected and rights remain inalienable. But that is all just marketing, kids. That is just an incredibly well intentioned history book operation that jumped the tracks. Those weren’t geniuses, merely rapists and fiends trying to avoid taxes.

Lindell is such a fat sack of rendered shit and I know it’s not cool in this (or any day and age) to fat shame. I’m not body shaming Mike Lindell. I’m shaming Mike Lindell, and his body is coming along for the ride. What a loathsome inbred porcine oaf. What a useless castrated inane mindslave. What a traitorous conspiring opportunistic MAGAt.

It has been said in earlier reports; I don’t fault Trump for being Trump. He can’t help it. Like a pit viper or matinee, Trump didn’t ask to be born Trump. But, Trump supporters? Somehow people make that choice. They look at that flailing dumpster fire of a con man and say “Yes. Please give me some of that. Let me follow that into the future.” I wish I could feel sad for those people but all I feel is anger. Ungovernable rage.

Lindell should not have gotten into the ring with me. He’s as dumb as a box of broken hammers and twice as useless and his decision to fight me was just one more bad choice along a line of bad choices that had let him to that point. Standing with a pillow full of anthrax facing off against Q in a quarantined box inside a 5,000 seat pole barn in northern Minnesota.

Before we began the hazmat-clad referee forced us to come out and shake rubber gloved hands. It’s something I didn’t want but was contractually obligated into doing. Then our neutral corners. Then the bell. Cheering crowd, rising from their seats, ready to see the feathers, blood, and mayhem. Flashbulbs from phones and the low baritones of our announcer for the evening, Barack Obama.

Obama still owed me for no-showing Four Garys and I pulled in the favor. No one wants to be sent on a guilt trip. Or a gulag, for that matter. One of the things with fighting Mike Lindell is the symbolic battle of fighting against MAGA Gulags. Anti-Education camps. Get the woke out, or we hang you like down in GITMO. It all sounds fantastic until you consider the final solution fit into a manila envelope.

Round 1 neither of us deploy our lethals. We’re both fairly padded up in tactical gear and it’s possible one of us will heart-attack out before it comes to that. Round 2 and Lindell is thinking about popping anthrax because he’s tired. He’s winded and lazy and sloppy and if I had a blade in my hand he would be a deli counter by now. But you don’t get 1 billion people to pay $10 a screen to stream Mike Lindell being murdered normally. No no. The pillow fight seals the deal. A meta ouroboros.

I am also lazy. I’ll admit it. I don’t like working out. I don’t like fighting people. It makes me tired and gives me anxiety. Managing adrenaline is a delicate art. Being hit in the head with anything while wearing tactical armor takes a toll. Even if it’s an overpriced uncomfortable pillow that turns brown and mildews within the first week of use. Even if it’s just a limp but modestly armored glove, thrown outward without skill or grace. Late in the 3rd round I pull a Hamlet and get his pillow and give him mine.

The round 4 bell and Mike takes a moment to hush the crowd and speaks.

Mike: I know what you did, Q. I know you used a poisoned pillow and now I’m going to kill you with it.

What we refer to in swashbuckling as either a “Reverse Hamlet” or a “Laertes Ascending” attack. I play along. I hate to see someone die disappointed. I hate to see anyone die. Lindell closes distance and activates the syringe package. Hypodermic fugu erupts from within the pillow interior and Lindell brings it down in a dramatic double overhand hammer blow.

It hurts. I get poisoned. He backs off a little, hoping to watch me die, and I front kick Lindell’s  pillow into his own face. He pulls it away and a needle is sticking out of his cheek. There is a realization I see in his eyes. A quick tour of the Kubler-Ross. Then he sneers at me.

Mike: Then we die together.

He falls to a knee, the toxin pumping deep into his systems now. I close the distance and hold his head in my hand with a gentle firmness.

Q: I built up an immunity to fugu toxin, you dumb bitch.

Something beyond Kubler-Ross lights behind his eyes.

Q: AND NOW I FEED YOU YOUR MYPILLOW!!!

Piece by torn piece I take his MyPillow and make it HisPillow while screaming “Your pillow is not MyPillow!!!” over and over. It never will be.

Obama has left the building. The audience is vomiting in the stands. Paramedics are suiciding with their best drugs. Around the world parents pull their children away from screens and beg for forgiveness. I wish I could stop, but every piece of pillow I put into him makes me feel marginally better. About the whole treason/insurrection/conspiracy/misinformation stuff. Our broken world.

When I’m done the bell rings. The feeling is gone. I shower. Do a brief interview with ESPN. Collect my check. Nothing really got better in the world. I had made $5,000,000,000 killing Mike Lindell.

But I would have given it all back to do it again.

Did you somehow enjoy this Q Report? Why not read another?
Who wrote this insane bullshit?
Email Post