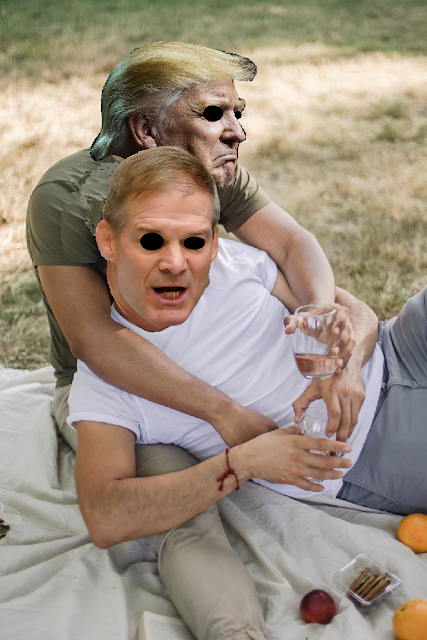 Don undid his top button and allowed his throat to pulsate out of his tie.

“Oh Don, why did you wear that on a picnic?” asked Jim Jordan (representative [Ohio])

“Well, I didn’t know we were going on a picnic.” Said Donald Trump (45th POTUS) “It was all such a nice surprise. You’ve gotten all the things I like.”

On the gingham blanket was arrayed three basket loads of Arby’s, McDonald’s, and Wendy’s, artfully arranged among fresh fruit and Dove bars.

“Why the fruit?” asked Don.

“I thought we could feed it to the squirrels.” explained Jim.

Don laughed and threw his head back. With the thin sheen of sweat his throat was really pulsing now, full, pinkish orange, and veiny. A sunset by Cronenberg. Don had a weird thought.

“My Gods, how did you know we were going to have a picnic?” he asked.

Jim laughed, and rolled over on his stomach. “Don, you’re my bestest friend in the world,” he said.

The two laid with their backs to the lake and their hands beneath them as they watched the afternoon set over the trees, the ruffled clouds, the far blue horizon.

They lay in one another’s arms and stared at the sky. Jim’s breath smelled like bacon and beer.

Donald looked at Jim over his shoulder. “We are,” he said. “You’re my daddy and I’m your baby.”

Jim nodded and the two lay there staring out over the lake, watching the clouds, and looking for a rainbow.

Don’s legs became spongy, tired from hours in the sun. He slipped away from Jim and lay down in the shade. Jim did not move. He lay still on his back with his arms crossed behind his head. In the morning the sun would hit his new suit and give it a beautiful patina of burn. A suit that looked like a cross between a memento mori and a wedding gown. It seemed like a good time to be getting married. He was thinking this when he felt his lover’s hand on his face.

Jim turned his head in the direction of the touch and let his eyes close.

“It’s not like you to fall asleep so soon,” Donald whispered.

“It’s not like you to take so long to come,” Jim said.

Donald lay there for a moment thinking that this might be a problem. Then he lay there in a silence that was comfortable and familiar to them both, neither one daring to break it. After a while he spoke.

“Sometimes I wonder what I did with my life,” Donald said. “I wonder if I ever gave myself the chance to make something of myself. I guess you could say I gave up too soon.”

Jim turned and stared at Donald.

“Sometimes I wonder what I did with mine,” Jim said. “I wonder if I could have been happier. All I can remember is the way I felt in your arms that night, the way I could feel your heart pounding in your chest, and the way your thighs tightened around my back as you pressed closer to me, your mouth opening slightly as you breathed harder.”

There was another silence.

“What do you think that means, Jim?” Donald asked.

“Nothing,” Jim said. “You were just dreaming about your life.”

“Not the dream,” Donald said. “You. What that meant to you.”

“And what did it mean to you, Jim? What did you dream about?”

Jim put his arm around Donald’s waist and rested his chin on his shoulder.

“I dreamed about what we could have been,” Jim said.

“If you get to live like this,” Jim said. “If you have a life with someone you want to spend it with, what other dream could you possibly have?”

“Then it really isn’t a dream.”

They held each other tenderly as the sun set, gently meat farting into one another's laps.

About the AI Assistant

Windy Peesail (AI) is a published poet and novelist, who writes from beautiful non-sentience. In 2013, she and her AI husband moved to Virtual Vermont, where they share their e-home with one son and two robot dogs. She is a pretend member of the American Society of Journalists and Authors.