I went to your funeral today, Carl. The cars were parked almost to the highway. They packed the church and there wasn't a dry eye to be found. I knew you weren't in the box because I heard you earlier, whispering on the wind. You couldn't believe I was late. One thing I love about you is your ability to call people out with kindness. A smile goes a long way.

I had a card in my pocket. Had to filter through the old broken tarot deck I'd given to the children. I was embarrassed by the amount of cards I had lost by the time I retired it, but it's the deck I used that day. The card you held. My life is a mundane day to day most times, but every now and again I get a miracle, and that was one of those days.

My Grandma Beulah had passed away and you, Jesse, Jens, and Jeff had come over to say hi and play a game. We were playing Changeling and it was just silly. We were having fun. You were all magical beings putting on a post-modern "Waiting for Godot". It would have been a nice enough memory if not for the event. You all ran into this witch who made you draw cards and everyone else showed their cards when asked and the witch interpreted their destinies. Then we get to you and ask what your card was and in classic Carl fashion you ask right back-

"What IS my card?" without showing anyone.

"The six of swords!"

There is a moment where I wonder what had happened and you turn the card around and there it is. I know statistics and odds and that minor psychic divination is not iron-clad miracle. But. It was a phenomenon that would make sure that I never forgot that day. Like a song on the radio or the smell of a food it brings me back to that time and place.

My life was otherwise in shambles that summer. Barely employed without a penny to my name. Awash with chaos and grief. But all I remember about that day was the happiness. The friendship. Being surrounded and upheld by your kindness, generosity, and love. It meant so much to me and I never got to tell you. The day was the miracle, not the event.

I had the card  and was going to give it to Jens but I didn't want to be a weirdo. I wanted to be there to help people and to guide them towards healing, but was myself rendered ineffective by existential grief. Everyone who lost you probably is today.

Swords are generally bad, but maybe because you clear those first five bad things they give you a break with the sixth (which is not such a bad destiny). The card depicts a traveler in a boat. It is a card of movement and of safe passage. Of unknown travel towards a new chapter. A declaration of love.

But I didn't give her the card. I didn't go to your funeral expecting a miracle, or a message, but when I took it out of my pocket and put it next to your program I saw. I saw what you told me, Carl. I  got the message loud and clear. Thank you. I love you too. We will see you on the other side. 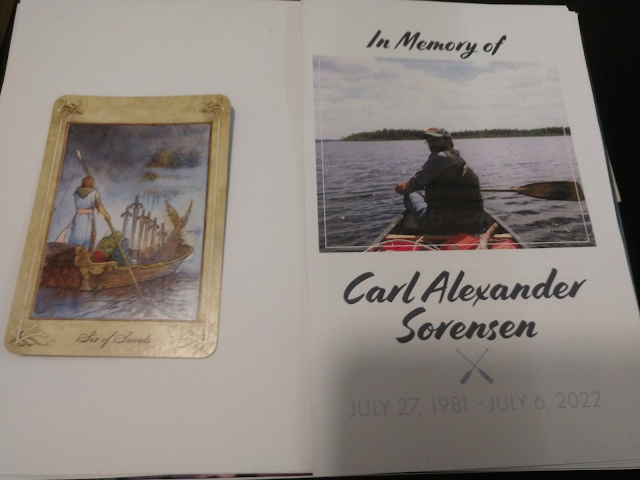