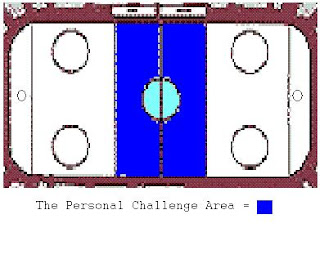 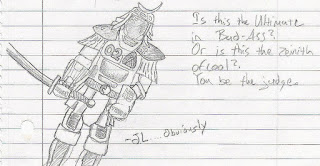 Rules and Regulations of Samurai Hockey.

The Zen of Samurai Hockey:
It is not enough to kill an opponent.
They must be destroyed completely.
Crushed under the weight of my terrible blade.
I shall be a Three-Blade Monster.
And there will be those who will fear me.

The arena of Samurai Hockey is the standard NHL aproved hockey field. All lines remain the same, however there is an undrilled bowling ball placed securely on a pedestal 4 feet tall. There must be a receptacle at the base of the pedestal into which the bowling ball may fit comfortably. The pedestal is to be placed center of the front net position as outlined by NHL markings.

The Goal of Samurai Hockey is to Win.
Winning can be attained through two conditions.

Primary Victory Condition:
One teams sphere is taken from it’s pedestal, and placed in the foot receptacle of the opponents pedestal Three times.

Secondary Victory Condition:
A team accrues 50 cumulative honor points as a total from all of it’s individual honor points.

A player gains a single honor point for felling a man.
Felling is defined by removing an opponents blades from the ice, by use of sword, misdirection, or hand strike. Use of skates in combat is strictly prohibited, and results in a loss of personal and team HP of no less than 10 points as determined by the Over-Judge.

There are to be no less than eight judges for any regulation Samurai Hockey game. 7 Player-Judges and one Over-Judge. Each Player-Judge is assigned a single player on each team, and it is their responsibility to award honor points to either that player, or the opponent who fells that player. The team to be judged first is determined from a coin toss previous the beginning of the game. The winner of the toss has a choice of being judged at the first half or second of the game. A judge is given two flags at the beginning of the game. The flag represents either of the two opposing teams. When an honor point is gained as the result of a felling, the victors team flag is raised and the point is recorded by the Player-Judge, and Over-Judge. The Over-Judge’s only responsibly is to record Team Honor Points, award Sphere-Points, and to Judge personal challenges. Since there is never more than five men of a single team on the ice, the two Player-Judges not actively monitoring a player are responsible for recording the Personal-Honor Points on a “Preliminary Personal Honor Point Chart”. After the game is finished the results of the “Preliminary Personal Honor Point Chart” may be challenged within a weeks time by the teams Shogun as a result of review of game footage. After a review it is the Over-Judges determination that is the final say. After the first half of a game, the team being judged switches, and Player-Judges monitor the opposite players. The Over-Judge, once satisfied that 50 Honor points have been attained by a single team, or that 3 Sphere-Points have been accrued by a single team, stands and yells “Victory!”. All combat is to cease, and all players must bow to the Over-Judge, in acceptance of his decree. The Samurai must then bow to the Shogun of each team, each other, and only then may they exit the arena.

There are three positions a team member may take on the arena. Forward, Defensive, or Guard. There may be only two Forwards, two Defensive, and one Guards at any time. The area’s of operation are as such: A Forward may combat on any portion of the ice and are unrestricted as to passing, or handling of the sphere. A Defensive Player may not cross the half-line unless in active declared pursuit of an opposing ball-carrier. A Defensive Player may only handle the sphere if it is passed by a forward, and may subsequently score. A Guard may not leave the rear most quadrant of the ice, and may not engage anyone in combat unless they enter this area. A Guard is the only player who may not declare a personal challenge unless towards an opposing ball carrier.

A Samurai may, at any time, declare a personal challenge. This Challenge is directed to anyone but the guard on the opposing team. The Challenge may be refused, but at a loss of 1 Personal Honor Point for the challenged. The Challenge is declared by holding the sword by mid-blade, and with the off hand pointing at the challenged player. The Challenged player accepts the challenge by sheathing his sword and entering the challenge area. To refuse, the challenged player places the handle of his sword on the ice and 1 Personal Honor Point is deducted on the “Preliminary Personal Honor Point Chart”, but is not deducted from the Team Honor Point Total. If accepted, the play clock is stopped for 10 seconds, and all combat ceases. Within the 10 second set up time the Challenger and the Challenged must sheath their swords and enter the Personal Challenge Area. If one player is outside the area after the challenge has been declared and accepted, it is considered a ring out after the first round. After the 10 seconds have ended, there is an alarm, and combat within the Personal Challenge Area commences. All Personal Challenge Combat Must begin with both men on opposing lines. Once so positioned Combat must begin with a Samurai Charge. Once a Samurai is felled, or is removed from the Personal Challenge Area by force, or inertia, a point is awarded for the opposing team, as judged by the Over-Judge. The Over-Judge then must ask; “Is the Challenge Satisfied?” and if an opponent bows the Challenge is ended, and following a five second recess, game play continues. However, if after the Over-Lord asks for resolution one of the parties is unsatisfied, either Samurai may sheath his sword and take stance on his line, and combat continues. Points awarded as follows:
Match 1: 1 HP
Match 2: 2 HP
Match 3: 5 HP
Match 4: 8 HP
Match 5: 12 HP

A Personal Challenge can go no more than 5 rounds. If a Samurai refuses Satisfaction after 5 rounds, he is considered a classless Ronin.
A man can accept no more than one personal challenge per 50 honor Points. Not until 100 honor points have been accrued may a Single Samurai accept the challenge from two foes.

Are to be NHL Approved blades, unless Samurai has become a True Samurai, whom-upon weapon restrictions no longer apply.

Are to be no more than 7 men. There is a two man rotation. Five men to a team, on the ice at a time. No more, No less.

Each State is to have no more than one team. It may be corporately sponsored, but must adhere to the SHL Pay-Scale. Tournaments may only be sanctioned by the Shogun Daimyo, and must occur in Bemidji, Minnesota. It is a single elimination rank structure that culminates in a regional battle to take place on Lake Bemidji. Stadiums must be available for the paying public.

Weapons are to be constructed and sold by one company on the planet. Duels/League Tournaments/Pee-Wee Samurai/and/or Dinner Functions must use Officially Approved Samurai Hockey Authentic. Else to cross swords on the ice is condemned.

Must have full facial as well as neck protection. And cannot be constructed out of glass, explosive Material or Ice.

Are to be only approved SHL equipment.

Tower Hill Productions Inc. reserves all rights for the production of any Samurai Hockey Promotional Films and/or advertisements.

Is a bidding process offered to American sporting goods providers.

The Samurai Hockey Pay Scale is dependent on Personal Honor Point accruement. The farther up the Samurai Ladder, the more exclusive and lucrative the pay. In addition to listed hourly pay, every member of Samurai Hockey is given Health Insurance through our affiliates which costs nothing to the Samurai. Below is a chart of the pay and commiserate benefits/bonuses.