Ask anyone in theater if it is possible to produce a Pulitzer Prize winning drama with $100,000, and they will more than likely tell you no. Maybe the more optimistic, or visionary, might look at that amount and realize the potential, and tell you it is merely highly unlikely. Ask those same people if it is possible to write, produce, direct, and perform in a Pulitzer Prize winning drama with $1,000, and you are unlikely to find anything but no. It is lucky then, that I do not believe in the impossible, merely the improbable. Along a long enough time line, say infinity, the improbable is nothing more than the inevitable. I take comfort in knowing that if I never succeed in writing a prize winning drama in this life, that in some tangential reality, it has already happened. 21st Century Play is probably not a Pulitzer Prize worthy drama. To be entirely honest with you, it is still not perfectly what I wanted it to be, but it is moving in that direction by the second. I am producing it because of a sincere and abiding belief in the value of the work. It is no Driving Miss Daisy, by any means. No, we are trying to tell a different story, here. But perhaps no less important. It asks questions about our society and theater, what we value, how we respect it, and whether it will survive past our ability to protect it?

John Steinbeck wrote, “The theater is the only institution in the world which has been dying for four thousand years and has never succumbed. It requires tough and devoted people to keep it alive.” It was a gracious nod to a perpetually dying art, but what would Steinbeck think of our world now? A world where few read, let alone attend the theater. A world where the price tag of a performance has outpaced the ability for a person of simple means, or family to attend. Theater works best now to build community, and foster learning. Earning money is a virtual impossibility. Consider film, and how a performance from an actor need only be captured in one insoluble, perfect take. From thousands of such perfect moments a feature film is built, and stands forever as the only way an art can exist into the future. Stanley Kubrick would do hundreds of takes, pushing performers to the very brink of mental and physical exhaustion. He would have hundreds of thousands of hours of film to choose from to build his works. He also had millions and millions of dollars at his disposal.

I believe that a person can do something for love, or for money, but never both. I have to believe that if my craft is checked successfully, the performances alive and free, and I direct my message forward through time with enough energy, and love, that it could better the world. It is a fools notion, soaked in brazen optimism. My message is no more worthy than any you may have. Told with no more eloquence, or complexity. But it is mine. In a world that will take everything from you, it is significant to have something  you can create and love. I have created it, nurtured it, altered it, and I send it forward without fear, and with an open heart. If the Gods created us in their images, then in the art of creation we become closest to them. When groups of people, aligned in purpose and invested with will come together to create something, miraculous things happen. What could have been good is made great, and what would have been great is made fantastic. Through collaboration and cooperation we transcend what any one person could possibly accomplish alone.

Our lives are lived building and then losing our memories, the ebb and flow of human experience. I am sad to have lost so many memories to other information. I wish I could remember my youth, and the joy I was ignorant to. Before I ever learned about the genocide around us and the weapons poised to destroy us. When the world was gold with light, and filled with life.The only timeline that abides in the chaos of my life are the productions. I can look back through the years, in my minds eye, to those many faces. Those young innocents that pounded the boards with the anger of a generation. I see them dance, and sing, and scorn, and love. I remember their stories, and their struggles. Their very lives a tapestry interwoven for a moment with ours. In theater we create a brief, perfect family. A perfect society that must endeavor together towards success. We have lost so many, along our way. It is hard to look back, now, and remember them. To see their ghosts dance under the stage lights, unaware that they are gone everywhere but that stage. Sometimes, they are captured on film, and that is hardest of all, for it is the clearest. We could almost reach out and touch them, but they are gone forever.

The beauty of theater is the dying elegance of a well cut flower. It is a sand painting thrown from a cliff. It is the oldest and most fantastic of magic because it demands that you suspend your disbelief. Whole crowds, charmed into believing they are seeing king Henry the Fifth at Agincourt. That they are in the dust bowl, and starving. That the world outside is a colorless void, and within this space is the most entertaining thing happening anywhere on the planet. That the struggles we see played out before us are important, because they touch the lives of those who listen. They change hearts, open minds, and free the spirit. Western theater is based on the teachings of Aristotle who believed that theater was an essential component to human existence. He thought that by exposing the tragedy of human existence, that the humors of the bodies could be balanced through releasing these emotions. He called it catharsis, and it means cleansing.

I wish that our society was as enthusiastic about employing Aristotle's principles as they are teaching about them. For instance, a college could claim to be a liberal arts school and then eliminate their theater department in order to build a hockey stadium. Base whole texts on the value of western society while ignoring the terminal decline that is far closer and more dire than any philosophy. The world is destroying our stages. The financial insolvencies of modern live performance have collapsed entire networks of learning and art. Those organizations robust enough to survive the economic collapse and media fragmentation have done so through compromise, adaptation, and perseverance. Those that have not are gone forever. To see the stages my family, living and dead, blood and soul, have danced upon rotten and razed has tested my soul. To see the visionary efforts of so many leveled to the ground by the ignorance of so few. It is a war, and art, humanity, is losing.

This is the clarion call to arms, dear reader. If you have made it this far then I don't have to convince you that the arts are important. What society has succeeded without art? It is perhaps one of the only universal and binding thing humanity can use to communicate and bridge the gaps in understanding and culture that keep us apart. Educate and inform while entertaining by creating a positive, all-inclusive, secular, community experience. Maintaining a storytelling tradition that belongs to no one culture or society, but travels back to when we were all one tiny and rare people. A handful of humans in a world of monsters, gathered around a fire and in need of comfort and distraction. Come to our fire, and hear our stories. Our show is a tragicomedy, in that it incorporates aspects of both. Comedy and tragedy, the eternal dance of opposites, captured in performance for all time. Come and see our ghosts dance for you, once more. The stages will all burn and collapse, and we will dance still, on the ashes, and when we are ashes, still we will play. Come see our play, and remember to bring a friend. No one will get rich from this production, or probably even famous, but that does not mean it will not be the best thing you've never seen. 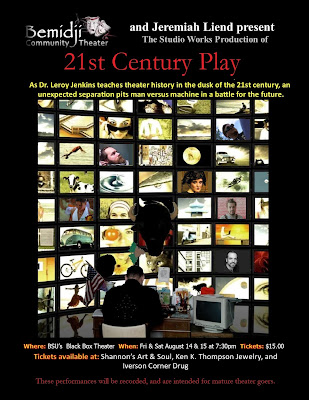