A well regulated Militia, being necessary to the security of a free State, the right of the people to keep and bear Arms, shall not be infringed.

Agents Et. All (Forget After Reading),

I’ve spent too much time today, arguing on Twitter. I don’t even like Twitter, I find it a trite and vain clutch of sycophants and bullies. The biggest bully of them all managed to tweet his way into the White House, and I only wish I understood how he did it. I have theories, and best guesses, but it essentially comes down to funneling hate and fear. The character limit on Twitter was a deal breaker, for a long time. However, being able to accomplish things such as crowdfunding and theater production requires a minimum amount of social media exposure.  I am still trying to inspire, inform, and direct society. I do this through my various projects, but it is so very hard. In the best of circumstances. These are not the best of circumstances.

I remember Columbine. It was the first semester at Bemidji State University. Red Lake is another shooting I remember, so clearly. Sandy Hook is a tragedy beyond the massacre, in the subsequent disinformation war. Before I get into the meat of this proposal, let me just say a special Fuck You to Alex Jones. You’re a fiend, a charlatan, and in a different age I would have already put a sword through whatever organ powers that grotesque gut pile. Alas, here we are in the 21st Century, where you can say whatever you want, if you have the money to back it up, and do whatever you want, if you have even more money than that. You should cease the Infowars, asshat. Crawl into a comfortable hole and quietly write your memoirs with a brain shake nearby.

Full disclosure, I have used guns, and own two. I have fired a fully automatic Sten submachine gun. My friend Zak and I were 13 when shot at by a man defending a meth lab in the woods. Zak saw buckshot tear through a tree to his left, but I was too busy running to see. We didn't tell anyone, because we thought we were trespassing, and that was normal. To be able to shoot at kids who wander onto your property. It was not. Then, or now. That Meth lab was later busted by the police. My mother found out about the bust, at church. In addition to these things, I've fired billions of virtual rounds, murdering millions of online opponents. Billions and billions in non-consumptive brass and laser fired into center mass and brain pans, so don't talk to me about shooting people. I could gun murder every f-ing one of you, but I don't. I love you. Dear reader.

Something must be done. The time for talk is over, the time for action is back in 1998, before Columbine, or any of them. Metal detectors everywhere, for one. Secure buildings, capable of bulletproof security lock down. At least our schools, hospitals, and places of worship? I could plan it, and I’m not even an architect. You make a sound sensitive system that confirms gunshots and instantly secures every door so an assailant can’t escape whatever space they are confined to. Then, you have response options, including but not limited to armed security, broadly dispersed non-lethal countermeasures, and emergency services. Give EMTs guns? Give clergy guns, as their vantage from the pulpit gives them a maximum chance of avoiding civilian casualties. How could more guns in churches be a bad idea? But for reals, I have a list of ideas, and they are all on the level. So, let’s get down to it.  First, some working terms.

There needs to be a better separation of types of firearms, since terms like assault weapon and such get bandied around with little mutual understanding. So, for our purposes there will be two categories of firearm; game and defense. Game weapons are single or double action non-handguns. Defensive firearms are handguns, automatic, and semi-automatic rifles and shotguns.

Why these definitions? Because of the purpose of the firearm, and how we follow their ownership and use. A bolt action rifle and a semi-automatic rifle are two very different tools, and should be defined not by the capacity or ability, but by their purpose. Use a defense firearm to defend yourself, family, and home, use a game firearm to harvest game. With those understandings, we move on.

Mandatory Militia. Every firearm owner in the US over the age of 18 and below the age of 65 must be registered in the Mandatory Militia. Such membership requires a minimum amount of firearm safety and maintenance, as well as a fundamental level of combat training. “A well regulated Militia” is not what our gun laws are achieving. What we have are 100,000,000+ individual owners, a full third of this doomed nation, scattered rough shod across the works. If we were invaded by Canada tomorrow, most people would simply surrender, rather than unlock the gun safe and run the risk of being shot by Mounties. Moreover, the government has failed in their responsibility to maintain militias, as a check against their balance of power. Currently, our military has the bulk of our financial and technological property. What are people with rifles, organized as they are, against an Abrams tank battalion? Grist for the war mill, and nothing more. The only advantage our citizenry holds over a potential war with our government is the hope that our nation would not nuke itself. We can only hope.

Federal Registry. Every firearm and round of ammunition should be registered and tracked by a central federal agency, the ATF being the most obvious option. Many people fear that the centralizing of such information will lead to the ability to somehow reposes, or disable such weaponry, or track users for nefarious purposes. But, the advantages to having access to such information far exceeds whatever possible damages it may cause. The reason for such measures should be obvious. A comprehensive registry of weapons could begin to eliminate the black market for weapons, and provide an invaluable tool for law enforcement in predicting and responding to violent crime. I know, I know, anyone who owns weapons is already frothing at the mouth, by now. You open with the most extreme measures, and work forward.

Firearm Buyback and Bonding. Every state will have a federally funded buyback program that pays premium prices (5-10 times market value) to get firearms out of the market, with a specific focus on defense weapons. Buyback programs targeting urban areas have seen success, and a better funded and universally deployed market of buying weapons is in the interest of the government. Why spend trillions of dollars, oppressing Afghanistan for another decade, when you could spend billions building a stockpile of functional arms? The money you give someone for their firearm stays in the country, and acts as an economic stimulant. These future stockpiles will require the construction of community armories, which will also offer the option of bonding firearms. Bonding a weapon places it in storage, and pays out a certain amount of annual money as a premium against gun violence. A theoretical Anti-War Bond. As well, if you are going to kill yourself, or others, driving down to the community armory to check out your gun is a point of possible intervention for either situation. Community armories could also be deployment and training locations for the Mandatory Militia.

Firearm Insurance. Everyone should have to insure their firearms. As a means of providing for their damages caused by them. Maybe you never cause any damages, with your firearm? In which case you can relinquish it, and get cash out your premiums? Maybe you die, without causing any damages, and this money is paid out in addition to any life insurance you may maintain? But maybe you murder a busload of nuns, and it costs millions of dollars in immediate and ongoing damages? Then, that insurance pool is used to make sure that the families of those nuns can want for nothing. That whatever material, medical, and mental needs are met adequately, and in perpetuity. If I must have health insurance, then you should have to insure your gun. If people are using vehicles for weapons now, then why not insure firearms in the same fashion? Firearm Insurance. Stat.

Center for Disease Control Research. Our government should rescind their policy forbidding CDC research into gun violence. Such roadblocks do a severe disservice to our citizens, and their posterity. If their research can improve our lives, fantastic. If their research could save lives, then we are murdering people with our negligence. If 400,000 people in the US were all dying of anything else, we would want it researched. But, because it is done with firearms, somehow it is all just nutty coincidence. Well, poop to that, I say. Poops.

Bulletproof School Uniforms. This is a sad one, and the last one I can really offer, probably, before breaking down in gut wrenching sobs. But, at least for K-12 education, we should start making our kids wear bulletproof uniforms. Ideally in the next 3 years. Because there is no way I am sending my little girls into those murder factories. If someone hurt my little girls with a gun, there would be no corner in hell they could crawl that I would not find them, and somehow make things worse for them. If you are not going to move forward with the bulletproof super secure schools, then the least you rat bastards can do is put some Kevlar on those innocent children. Just think how nice it would be? To not have to worry about being shot anywhere but in the face? I can only imagine as I, being poor, have no Kevlar. I have laid my plan for Kevlar bellow your feet. Tread softly. That shit’s expensive.

So, that’s what I’ve got. Those are the best ideas. Probably falls somewhere between Swift and Thompson, but at least it’s better than arguing with the mouth breathers on Twitter. Those ignorant pigs. Those forlorn mindslaves. How I loathe them. Yet love them? If you believe as I do, then disseminate this to your lawmakers. If not? Well. We’re probably all getting murdered with guns? 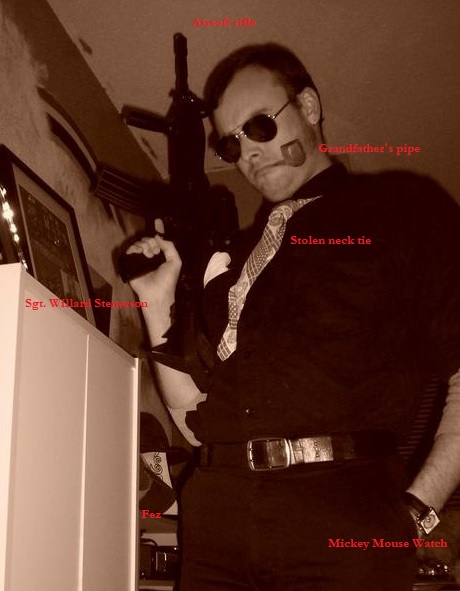 What is a Q Report?