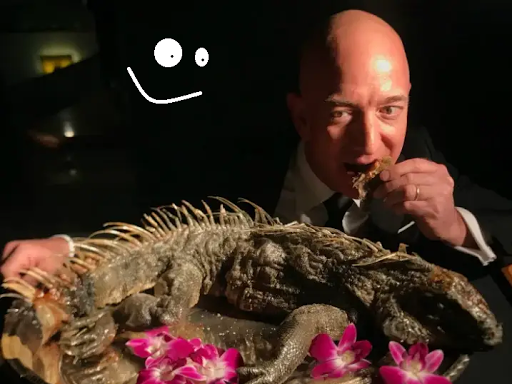 I remember the first bite, those many years ago. Eating Jeff Bezos. There was not much to go around as there were lots of us there. Artists. Transhumanists. Dignitaries. Revolutionaries. Amazon staff. United in this grand BBQ. There was some debate on how to do it. Semi-humanely. In the end all landed on exposure to space induced hypoxia followed by cooking. The ride into space isn’t as fun if you have a compromised capsule. As humane a final ride as any (if not consumptive) and immediately followed by being gutted, spitted, and roasted for a gathering of fine young cannibals. Shave me off a little more Bezos. I’ve never tasted trillion dollar meat before.

We had already eaten Elon of course. Or “they” did. The others. I couldn’t make it, but it was a similar deal. When you talk about some sort of economy leveling Marxist cannibal revolution, you picture a horror show. The end of zombie pictures where the victim is torn apart limb by limb, their viscera torn open and fed upon as they scream in agony. In fact when it became clear they were going to be eaten the rich were willing to go easy, provided there was a minimum of undue cruel/unusual punishment. It’s amazing how easy it is to kill someone with an IV of BBQ sauce, but that would not be ethical. Instead you kill them with fentanyl. First. Then you hit them with the BBQ.

Zuckerberg actually had his own cannibalizing planned for some time. Had his very own special taser and airgun setup that he similarly used to stun and then end the life of his family goats. Killing and eating his goats for guests was something he deeply enjoyed. All while basking in the wealth made riding the collapse of society into fame and fortune. There’s something singular/titular making the pioneers of industry and science eat your abused goats for dinner. I didn’t eat any, but I was told by attendees that Z tasted a little like a goat. Like hay, poop, and oats. This was early on in the eating of the rich. Lots of catharsis to be had but also a lot of tragedy. Lots of people think that a corporate tax rate of 30% could have stopped it. But then these people would still be out there, somewhere.

Eating Bill Gates (in light of the charges) was as close to that zombie frenzy explained earlier as it gets. It wasn’t just the charges, but the windows updates, too. I didn’t like the way they ate Gates, but it was my earnest hope that the updates would end. Of course they did not. Everyone did a raw Bill Gates pull apart and STILL with the updates. Every time it updates my browser gets marginally worse because of a multi trillion dollar Microsoft vs. Google dick-brain measuring contest. Every. Time.

I felt bad about Melinda Gates. She didn’t deserve to get eaten, but she also could have easily avoided it by donating her billions of dollars to charity instead of another super yacht. You know the kind, with the elegant helipad/basketball court on the fore and a respectable Jacuzzi bar aft? The thing is, getting a yacht without a helipad is like getting a house without a garage, but you also don’t want that big ugly H on your aft mid deck all day long. Thus the retractable Brazilian teak regulation basketball court. Some people can’t afford their diabetes medication, others can’t get enough Brazilian teak. It’s the world in which we live, unfortunately, and in the end Melinda ended up on the buffet.

Speaking of Buffet. That guy. For as much as he liked talking about how rich people should pay more taxes, he did not. Not in a way that would in any way diminish him being one of the wealthiest people on the planet. Mouth service is what they call that. No no, lip service. I think mouth service is a different thing. The thing with eating old people is that you would expect the meat to be gamey or tough, but it’s more like aged or Kobe beef. Most of the time. Oh, you get a Kirk Douglas in there once in a while, and that’s going to need to go into a crock pot. But for your run of the mill “golf as exercise” billionaire, after 50 is a tender and delicious treat. I talk about eating these people, but you should know that I very rarely do. But these anarchist revolutionaries are fucking crazy for it.

Bernard Arnault is the final rich person I’ll mention getting eaten. Lots of people don’t know who that guy is, but a lot of people have heard of Louis Vuitton handbags for hundreds off of retail. At least they would if they managed an unmonetized semi-secret blog as a hobby/pursuit/punishment and dealt with a constant assault of robot comments peddling their random wares and services. Louis Vuitton handbags being something prominently featured among robo-jargon of this and every age. The Arnault affair was as elegant as you can imagine. Everyone wore ties and kid gloves. Everyone used silverware to eat everything. Candelabras and a string orchestra.

It’s how I want to be eaten, some day, if this blog ever takes off.

Did you enjoy this Q-Report? Why not read another?
Email Post