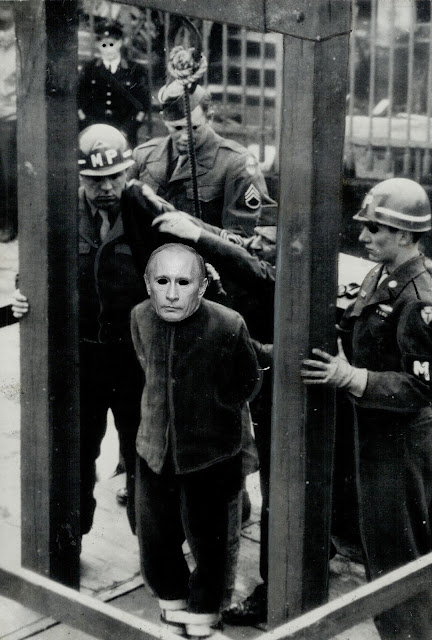 His 1,000 year sentence in Timeprison complete, the Temporal Transgressions Tribunal released Vladimir Putin this morning and he is predictably, completely, and hilariously insane. Just a gibbering wreck of a former human. They got him to a therapist and they will do what they can, but. I’m glad I got to see it. I remember back in the day, hanging that Блядь at the Hague. Hell, I remember the operation to capture and give him TO The Hague?! The trial! The nightmarish trial. With the dead children and the pregnant woman with the crushed pelvis!? Not that I like or want to remember! It’s why I’m chronically addicted to memory erasing drugs. On days like these, however, these milestones where terrible people survive hitherto unknown levels of personal anguish. Well, on days like these they wear off. So we fire up the timephone and send another useless report back, to the many fine robots who populate this hilarious blog.

When the Minnesota Time Institute was founded it set in motion a number of events that led to a variety of novel developments regarding our understanding and relationship with time. The mechanics are super boring, but throw enough funding dollars at enough researchers and eventually you get something like the timescope. The problem with the Timescope (and why the International Criminal Court forbid turning it on until 2035) is that it effectively ended history. That is, any part of the past could be witnessed through direct observation through time. Ergo no crime could be committed like murder, where anyone could get away with it. Because courts could simply go back in time to the incident, witness your horrifying crime via an impassive wormhole through timespace, and off to timeprison for you.

Timeprison being very rarely used in future society for the above mentioned reasons. No one can get away with murder, so why do it? We are just going to bring those people back to life, anyhow. And you are going to languish in a liminal internal space for untold years in nightmarish isolation (divorced from all senses but dread). But also, they had already HANGED Putin! Back in 2025! But he managed to avoid non-extraction through a technicality. I remember hearing that tyrant’s neck crack like dry wood when they dropped him. He didn’t do any of the typical getting hanged sort of stuff. No praying, no crying, no fuss, no last words. Just there to get the job done. After that trial, who could blame him? There had been several international petitions to hand the trial over to Ukraine but in the end The Hague had better lawyers.

It’s hard, because I do not believe in capital punishment. Personally. I think it’s a silly waste of resources and probably an abomination before the Gods. If it were a perfect system, maybe I wouldn’t have such an issue with it, but we as a civilization tend towards the cruel, unusual, and insane. The year before the operation Saudi Arabia had executed 85 people in a day, presumably by beheading. They traditionally behead people with swords. At a time when we have a space station, we also chop off people’s heads, in town squares. In the same year South Carolina brought back the firing squad. Things are always darkest before the dawn and in the end it was money that greased the wheels of Putin’s undoing.

Elon Musk had already challenged Putin to single combat with no effect. Of course Putin isn’t going to respond to a tweet, Elon. You have to get up in his face with it, dangle some money, some fame, and make sure that you make him look weak, small, and old, for not showing up to your decommissioned oil derrick in international waters. All of these things have to be lined up, if you want Vlad Putin to come to your sword fighting party. Dragons love tacos, Putin loves money. Offer enough commas on the victory purse and terms that leave survival possible why not gamble with a life well lived? The Bear of Russia. Come down to smite Musk for an easy $100,000,000 USD. AKA 10,665,000,000 rubles. Imagine the pantyhose and color TVs? Imagine the cheeseburgers and beaches? Imagine them all, even as the chloroform hits and you go to sleep like a gentle baby.

Little ride on a jet plane. Some processing and paperwork. Snappy dark blue jumpsuit. Next thing you know Vladimir Vladimirovich Putin becomes a prison number. Then? Years and years of reviewing the people he’s killed and/or  maimed, even BEFORE Ukraine. Sergei Magnitsky (beaten to death). Alexander Litvinenko (polonium-210 poisoning). Anna Politkovskaya (shot). Alexei Navalny (poisoned, imprisoned). Sergei and Yulia Skripal (Novichok nerve agent). All of these PEOPLE that were victims to this crazy despot and THEN we let him annex Crimea and that should have stopped him dead in his tracks. But no, let’s play nice with Putin for four years because the majority of our children are half Russian and then hey why not take the rest of Ukraine? Give a mouse a cookie and they will buy a handgun with it. That’s how bad it is out there, kids. Buy yourself a mouse proof jacket.

So of course he’s guilty of all of these crimes against humanity and sentenced to death and gets hanged in that snappy blue jumpsuit, pooping into the complimentary adult diaper provided. And he probably thinks he got off pretty easy, when you consider how awfully some of his poor victims died. But then BLAM! Back to life in the future, where everything is much much better, but also we have Timeprison, where we can make you spend more than a single lifetime in prison, with the maximum sentence being 1,000 years and reserved for only a very few dictators, fascists, and warlords throughout history. Glad we managed to stay on the right side of that history. For then.

Be well out there, all. It seems horrible, and painful, and awful, and that’s because it is. But. This universe doesn’t operate without you in it. Remain on mission. You beautiful weirdoes.