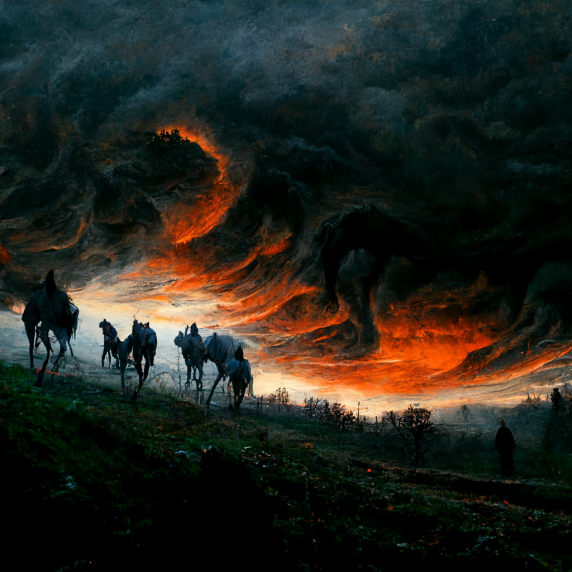 At dusk the Four Horsemen of the Apocalypse strode over the hill, War, Famine, Pestilence, and Death. Before them stood their opponent, the Last Swashbuckler, Agent Q. There was no time for words, or terms, but instead the riders charged even as Q did the same. Although without a horse, Q was wearing a serviceable jet pack which allowed him to close distance and deploy an initial volley of his incendiary munitions, a colorful spray of magnesium flares that blasted into the dried underbrush. Perpetual drought left the foliage a tinder box and flames soon erupted to the heavens, even as the last of the twilight gleaming failed.

Q's jet pack stumbled and fell, but quickly regained its vector and closed on the nearest structure—a cabin in the woods which Q decided to make a habitation as the last of his munitions burned away and his adversary made a run for it. Q turned and ran after him, but a sudden swish of a machete stopped him in his tracks. A man stepped out from the woods, his long, red, and dirty beard and mustache and hair streaked with the grime of the firestorm.

"Ah-hah!" he cried. "The Last Swashbuckler! I am the greatest swordsman of all time. You will die!"

Q grinned. "I'll give you a run for your money!"

The man laughed. "Do you have any idea who I am?"

Q gave a quick laugh. "If I did, I wouldn't be in this predicament in the first place!"

"I am Agent Q!" he called to the swashbuckler, who had now made it to a truck and had thrown its trailer over his shoulder to carry him away. "You are no match for me!"

"I'm not afraid of you, boy," the swashbuckler said.

The swashbuckler threw his head back. "Well, if I'm not, how can I explain the fact that you know a thing or two about me that you would never have discovered otherwise?"

"What do you mean?" Q replied.

"Well," the swashbuckler said, "you see, I'm the greatest swordsman of all time. When you have no sword, you have to learn to use your brain. And I will demonstrate a thing or two to you."

The swashbuckler started forward, but Q raised his right hand and placed it on the hilt of his sword. "Don't do it."

"Why?" the swashbuckler asked, and Q realized he had no other choice.

"Because I will use this sword and kill you," he said.

"Oh," the swashbuckler replied. "Well, that's OK, because my mind reading says that when you're dead, I win."

"Oh, don't worry," Q replied. "I'm only going to use this sword to demonstrate a few things to you."

Q brought his sword up into position, but as he did the machete caught the blade, wrenched it sideways, and snapped it in half. "That's not fair," Q said, and he was surprised at how disappointed he felt.

"Well, that wasn't my sword," the swashbuckler said. "That's an ordinary machete that I picked up along the way. We are going to be fighting with an ordinary machete, but of course you know that better than anyone. You still have a choice."

Q could not let that opportunity pass. He picked up the broken piece of his sword and handed it to the swashbuckler, who took it.

"How did you know that I'd break my sword in half?" Q asked.

"Because we both have the same mind reading. And that's something I learned from you."

"You mean you were reading my mind?"

"You see, you use the word, 'mind reading,' to describe an ability I don't have. I just call it the great sword."

"You were reading my mind?" Q said.

"Yes," the swashbuckler replied. "The trick is, you have to be right there with me. You can't let yourself be distracted by thoughts of the past, because it would affect your judgment. You have to be willing to sacrifice the past in order to save the future.

The swashbuckler tossed Q's sword away. "Simple! You must make a decision. There's no other way. You must choose. That's how I beat you—by forcing you to choose. I had to push you past the limits of your imagination, and then to step into your mind, and then into your heart."

"But the truth is, I really lost the first time I met you," Q said. "That was at the casino. I never stood a chance."

"That was just the first round," the swashbuckler said. "Now, we start again. And this time, you're going to die."

With a sudden strike, the swashbuckler attacked and cut Q's head off.

"Do what I was taught, what I'd been trained to do," Q said, raising the dead head to his lips. "Use the sword. Because the moment you are no longer a weapon, you are lost."

Q pulled his head back, and looked into the swashbuckler's eyes. He could see the great sorrow and regret they held, but he also saw determination and strength and courage.

Q placed the decapitated head back upon his shoulders. "Goodbye," he said.

About the AI Author: Quaddlebot 6000.

The deluxe version of the Qbot line, Quaddlebot has been servicing this media space for much longer than they deserve. Although Quaddlebot has been here for a while, they are still going strong, selling both on and off-planet, making millions and millions.

What makes Quaddlebot different from all the rest? A lot, actually! A lot more than I can describe here, so I'll let you experience it for yourself. Just know that this robot makes you feel like you are just chatting away, a personable friend, not a robot. It just goes to show what you can do with a little creativity and some high-tech upgrades. How can we use Quaddlebot to help others become more creative? Watch this clip.