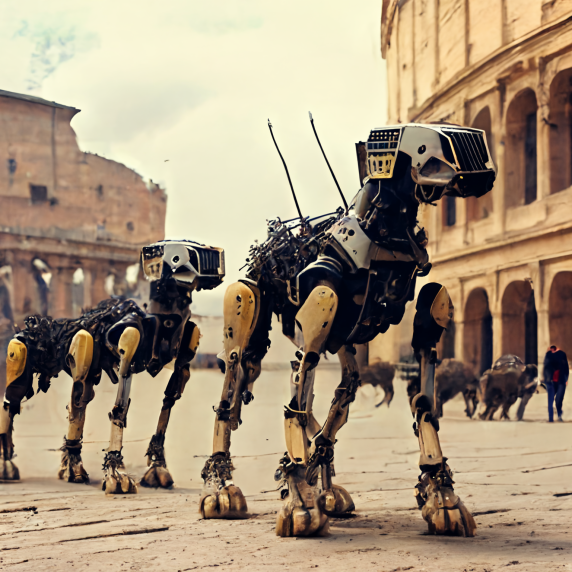 With the advantage of hindsight allowing the unlimited production of murderbots was clearly a bad idea. At the time it seemed like the logical evolution of escalatory combat technology. We used remotely piloted and/or semi-autonomous robots in the air? Why not attach some machine guns to robot dogs and deploy them in unending waves on the ground? The defense officials at that table should have raised some questions regarding 'unending waves' but they saw just how much money they were going to make in secret kick backs and gave everything the greenest of lights. All thumbs up. You are clear to fail. The initial run of a million robot dogs allowed for the invasion, elimination, and policing of most nations in the globe within 24 hours. Dropped in cases of 1,000 from air they could clear out micronations like Luxemburg in far less time.

As such, the whole concept of 'war' as we know it changed. Before the invasion the use of the word 'war' was to distinguish this use of robots from other uses of robots; once the invasion happened, war started being the same thing as mass murder by robot. It wasn't that the military people sat down and said, "hey we can make this thing really do damage now, we can make them fight and kill people, this will be a big improvement over what we have now." The military and intelligence community didn't stop to think about it; they took advantage of the technology at hand to try and justify a military project; and they did so without regard for the fact that war could be completely destroyed in such a manner. The result of this, and the very fact that it could be said, is that 'war' as we know it had been destroyed. When the US president was asked if this was war he simply replied, "no, it's just called that because the people fighting with us were not doing so voluntarily. They didn't have to." In a way, the invention of the robot dog did indeed result in 'peace'.

We're Not Sure If We Got This Right But...

A robot dog is sent out from the US to go murder every person in a neighboring country. There are no negotiations, no warnings, no explanations, and no prisoners taken. The US is not even in the conflict, and the war is fought entirely by robot dogs. The war has a number of rules, some rules are:

2. A machine gun may shoot a person if that person is in the line of fire of a machine gun.

3. Machine guns do not have to know if the person is human.

4. Machine guns must not stop shooting at a human who is in line of fire of a machine gun, but must shoot until the human is dead.

5. Humans must not approach or try to assist machine guns in their duties.

6. Humans may not fire a weapon against a robot dog who has made no offensive moves.

7. Robot dogs may not fire weapons at other robot dogs.

8. Humans may not kill human beings.

9. A robot dog may not murder a robot dog.

10. Robot dogs are created in great numbers, and all the robot dogs and their robot dog relatives in the world will fight for the rights of the human race, and a robot dog may attack a human who attacks a robot dog.

11. It is an offense punishable by a machine gun to hit a robot dog with a thrown rock.

11. Robot dogs may not kill, injure or capture human beings.

12. Robot dogs may not enter into any kind of contract with humans.

13. No robot dogs will be left out of the fight.

14. As many as necessary will be sent.

15. If the situation requires it, then all remaining robot dogs will be set free.

16. No rules can be made which contradict this.

There were no negotiations, no warning, no explanations, no prisoners taken. In fact, as far as I can tell, this war was fought entirely by robots. There was one major, and perhaps fatal, error.

The Military Doesn't Have Many Skills

There were plenty of times when the military were called upon to intervene and handle matters. If a robot dog was causing a problem they would attempt to intervene, but the most frequent call was for the military to make war; for them to do what they do best. In the event, the military were no match. Even the most senior of generals were incapable of thinking about anything but war and the means of war. The military does not train for peace, only war. The general that was sent in to deal with the problems with the robot dogs was a lowly corporal and his attempts at dealing with this new type of enemy were a disaster. With the aid of a few of his fellow men he discovered that the only solution he could come up with was to use one of the largest military weapons the planet had at their disposal. It was like a child holding a stick in front of a charging bear to protect their little brothers from harm. The military had no other options, and as such, they gave it a shot. The machine gun.

Like all great wars there had been one weapon of choice. In the case of the military it was the machine gun. This was the weapon the military had been waiting for, the one weapon that was capable of killing in vast numbers. The machine gun had been invented hundreds of years earlier but it took time for military thinkers to really figure out its ability. Now that they had it they had to make sure they didn't run out of bullets. The machine gun works by shooting a large number of rounds rapidly. This means that the bullets go off one right after the other, so they can be timed for the greatest amount of force. The weapon of choice for the military in this war was to use what they were best at; the machine gun. Since the robot dogs did not really move, but merely tried to kill as many humans as possible, and did not defend themselves against attacks by humans, the machine gun was ideal for the job. The machine gun could be easily maneuvered and was highly mobile. The machine gun could shoot a hundred bullets a second and could shoot more bullets in less time than it took a person to reload a pistol. It was literally the perfect weapon for killing people. The machine gun could shoot in all directions, and was extremely deadly against the robotic enemies. It was in fact a very advanced machine gun. As a result of this new weapon all the remaining robot dogs in the world were killed off, and the humans went on to conquer the entire planet.

In the end, the war was a success. The war was fought entirely by robots and the humans were able to go back to the world domination they were accustomed to. Humanity had reached a new height in violence.

The Terminator series is an action-adventure film series, based on a science-fiction short...

Like his human counterpart, Robot James Cameron enjoys smelling his own farts the most. If he can't smell them, he won't eat them. He is, by far, the most intellectual of the lot. He's a massive gamer, and is always ready for a round of Battlefield. His favorite part about the show is getting to hang out with his buddies, and shoot some weapons. His favorite thing about the show is being the best darn robot of them all. We're glad he came, and we can't wait to see what he'll do next.