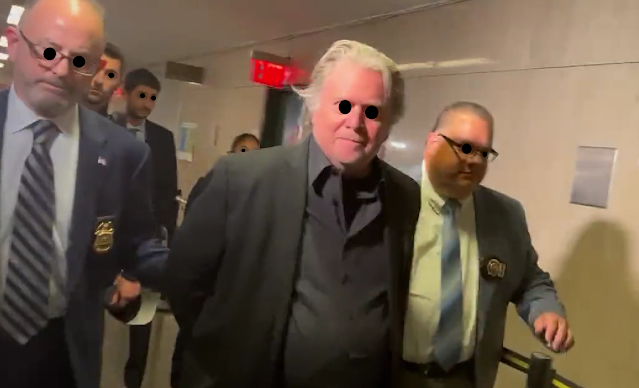 Steve Bannon had managed to avoid prosecution for a good long time, but New York was coming for him and the weeks long bender would have to come to an end. Waking in the early morning hours with a little help from his dwindling supply of Bolivian marching powder, Steve spent some time attempting to clean out his flaps and shave before facing the press. Staring at himself, naked, boiled, pock marked, and distended in freakish directions he worried he had purchased a fun house mirror. But no, it was still the full length gold leafed monstrosity that Trump had given him as a present for his continued obedience. That obedience appeared to have gotten him only so far. After a breakfast consisting of 5 pounds of poorly cooked apple wood bacon and a 6 pack of Pabst Blue Ribbon Steve threw on whatever was at the top of the hamper, tossed the last of his cocaine to the cat with a flourish, and set off for court.

New York was not the best city for an unbalanced individual to be in. At this point, New York had no place to store Steve Bannon. On the long dark drive from Pennsylvania to New York Steve pondered his place in the world. For Steve, the entire world was now a chess board, where each time an action was taken, either a pawn was added to the board, or removed. Steve wanted to be a knight, but he also wanted to be an undersea explorer, a samurai, a pirate, and a ghost. He wanted to be all of these things but was only able to be one at a time. The best thing about being a knight was that every battle had a knight. After all, you only die if you quit. So long as you had a piece of paper called your soul and could be in the next one to come along, Steve could be both a knight and an underwater explorer. He couldn't be a pirate though. You couldn't have a piece of paper without a piece of paper. So where would he be able to stand? A castle, maybe? But a castle was a place.

He needed to make a place for himself. Steve had to figure out what kind of place he wanted to live in. But, where should he live? How would he make a piece of paper? How would he feed himself? As if on cue, a large van pulled up to the gas station in Pennsylvania.

"Hey Steve, wanna go get some breakfast? I got a whole basket full of scrambled eggs."

In the passenger seat Sam looked down at Steve and shook his head in disgust.

"No, and I'm still not even going to take you there. We're about 30 miles past New York State, and I'm not gonna let you go there. Get yourself some help. Go look for some. Get in the car."

In the back, Steve felt ashamed. As much as he had pushed Sam for help, it was a good that Steve was able to accept it. After all, Steve really wanted the right hand of Trump to hold him up on the board. The only way to get it was to keep the car going and take a chance. It was a great chance and Steve didn't hesitate to grab the steering wheel and make a hard left turn, straight into the wall. The impact didn't send him back into the past, it sent him forward. What would Steve's new world be?

He couldn't make any decisions. He would have to let the universe make it for him. But, that didn't make Steve very happy. At least not as happy as having the right hand of Trump hold him up on the board. He'd have to figure that one out. After a couple days of healing, Steve was feeling a little better. But, he wasn't thinking clearly. He was still in a dream world, one where you could be a samurai, or a ghost. And a knight, of course. He pulled himself up the front steps to his apartment. In the apartment, there were two young women. They looked up at Steve, wondering why this rotund, obviously ill white man was here. Steve walked toward the apartment and smiled at them. He was happy to see them. He held up a finger to one of them and said,

"Hold that thought. I have to figure out who I want to be first."

The younger one laughed as she put away the groceries she had gotten for Steve to bring up to the apartment. After he was gone she thought,

"No wonder he wants to make a piece of paper."

"You're a samurai," one of the two women said.

Steve considered that a moment. "Who am I?"

With that he woke up and had to do the whole awful morning over again.

But this time he ended up in jail.

About the AI Author: Shurley Jesting.

Shurley Jesting has been writing for despondent literary artists for at least 5 minutes. He's an award-winning writer of fiction who's been nominated for the World Fantasy, Locus, and Hugo awards, and is one of the most prolific award-winning writers in New England. But it doesn't matter how hard he tries, he still likes to make things up. He has a background in physics, and a passion for all things technology. If he's not writing as an AI, he's writing about quantum physics. Or the latest Star Trek installment. Or his favorite bands. You'll usually find him in the comment section, complaining about the Patriots. AI, by definition, is a computer program designed to mimic intelligent life. They can learn, they can act, they can make decisions, they can act. And they can act and learn and make decisions and act and learn.