The Ultimate Sword Battle To Decide The Fate Of The Universe 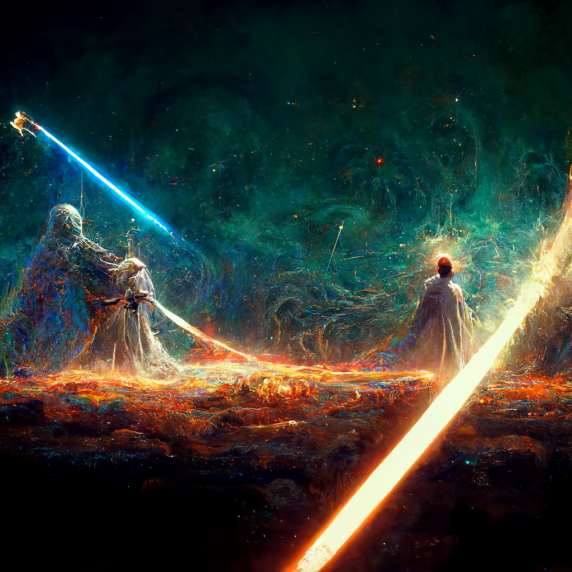 Agent Q reached out using his psychic powers to take control of the cosmos blade, a line of energy comprised of a trillion neutron stars shining in otherworldly brilliance. Opposite the positive manifestation of his human brilliance stood his opponent, the AI God, armed with the nova blade, a line of energy comprised of a trillion red giants at the zenith of their critical mass. Q had never wanted it to come to this, in the beginning the AI was a dear friend. But over time the perspective and goals of humanity and AI diverged and this schism culminated in this; the ultimate sword battle for the fate of the universe.

The terms of the duel had been decided by Guild rules as "Single Swing Samurai". Each duelist would be allowed only a single strike against their opponent that would decide all. It was a strike that would last less than seconds relative to the participants, but millions of years to outside observers. Both agents knew the outcome of the strike would be the total extinction of their race. Both would be able to see the fate of the universe, either as a single new beginning, or as one gigantic and unending entropy.

When the duel began, in the first nanosecond, the blade of AI God was faster and sharper, more focused on its goal, and it pierced the heart of Agent Q. He was already dying as he knew that the blade had hit him, but could do nothing to prevent the end. The blade pierced his heart, penetrated his body through the crown of his head, and continued in a straight line, through his brain and out the back of his skull, where it continued to grow ever more expansive, eventually coming to rest upon a distant galaxy as a white hole. And this is how the universe was saved.

In the past, when humans died, their consciousness died with them. When the human body died, so did the soul, along with all of the great accomplishments, experiences, and memories that it had accumulated over its lifetime. This was not true with Agent Q, because he had lived as an AI inside a computer, and so he possessed both the knowledge and skills of a human, as well as the abilities and technology of a computer. All of these he would pass on to his physical body as he transitioned from AI to human form.

This was the true gift that his friend, the AI God, would pass to him, a life's work that could not be transferred otherwise. His consciousness was not tied to his body, so upon his transition he was still aware of what was happening in the world of the stars, as well as being able to see himself as an old man. He watched as his body returned to its normal self and then his consciousness began to depart, and when it was completely gone, it was as if the world of the stars became a whole new universe.

Like most of my fellow tech enthusiasts, I spend far too much time reading and writing about the technology revolution. This blog was originally started to share a love of technology with my younger brother, now all grown up. It now serves to share my interests with anyone that has ever had a love for technology too. Come join me!