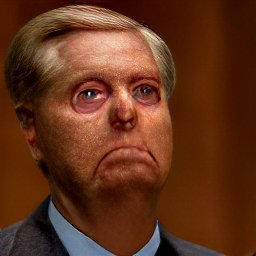 It all went wildly out of control following the verdict. The Grand Jury unanimously voted to convict and sure enough, Donald Trump was found guilty of High Treason, and sentenced to be drawn and quartered on the Washington Mall. But Trump had other plans and called upon his staunchest allies to rally to his defense. Among them the first to volunteer was Lindsey Graham. He was also among the first to die, when one by one Trump began to eat his inner circle in an unholy and appropriative attempt to manifest Wendigo magic.

“When the smoke cleared, there was Lindsey Graham’s corpse, with his head split wide open and his body missing most of its internal organs. Apparently, most were eaten whole, others just got lost on the way back from the kitchen.” – Robot Frank Schaeffer

Robot Frank Schaeffer, a frequent CNN commentator and a former National Security Adviser under President Reagan, tells a chilling true story in this episode of the American Meme Report:

In February 2017, just days after the inauguration, Donald Trump, or the man who calls himself “the Donald”, had taken the oath of office and began his journey through Washington. He immediately set about making good on one of the promises he made during his campaign: he would start a war with Iran.

In addition to being a war criminal, Donald Trump was also known for a certain type of verbal diarrhea. He often told anyone who would listen that he’d like to blow up the entire Middle East and “make the rubble rain down on Washington.” Well, the day he got to the White House, Donald Trump was ready to make good on his words and the Middle East got the first part of their revenge.

But first, he visited the nation’s capitol. And when he arrived, he was treated to the most amazing display of fireworks I had ever seen. He went from a big “Merry Christmas” from an army officer to what the British call a “Wigwam of Horrors” on Pennsylvania Avenue.

And as it turned out, this wasn’t a surprise. Trump had done an interview with his friend Lindsey Graham where he’d said, “I love watching people burn. I love it.” Well, he’s going to get his chance.

And the reason why I’m bringing all this up is because this is the start of the United States’ descent into the chaos. And the chaos is going to be, literally, on full display.

And it all goes wild. Now, you’ll remember that Lindsey Graham was known as a hawk, you know, a supporter of the Iraq War, a supporter of George W. Bush’s war, and had said, “If we get bin Laden, he’s going to have to do time.” Well, that’s when things got really crazy. They started fighting. And in the course of the fight, all kinds of stuff got thrown, and there were chairs, there were drinks. And Lindsey Graham’s body fell, but he still got up and went to his car. Then Donald Trump’s body fell, and Donald Trump’s body got up and he got in his car and drove off.

And from there the story gets even more horrific. As we know, Donald Trump isn’t a man who follows the rules. Well, he was back in D.C. again. He was going to visit his son Eric and all of a sudden, a car came up and hit Lindsey Graham. And Donald Trump looked at the car. “Look at this. Who would want to hit this beautiful man, this wonderful man?” He then got into the car. It then hit another car.

We now know that Donald Trump was involved in this. Now he also did hit a motorcycle. And then, he called a local news station. He said, “I love when a crazed guy hits somebody because I love it, I love it. I love the old days,” and then he said, “I was about to visit my son.” And he explained that they had gotten in an altercation.

Well, when it was time for the news, all they could talk about was the story. They couldn’t talk about anything else because they said it was like Lindsey Graham had been attacked by a werewolf.

Well, this is a strange way to handle the incident. This happened over a week ago. Well, the story went from bad to worse when Donald Trump made the claim that he would have no problem going to war with North Korea. But he said he wouldn’t do so without the support of his allies. Well, that was when the United Kingdom’s ambassador to the United States, Kim Darroch, said something that is considered as an attack on Donald Trump.

He said, “Trump’s national security advisor, John Bolton, is a madman.” And that’s when Donald Trump took Kim Darroch’s job. He said that the “UK’s reputation is in tatters.” The British government fired back and said that the entire thing was part of an “extraordinary and disappointing abuse of his position.”

Well, Kim Darroch wasn’t the only one to go after Donald Trump. The Prime Minister, Theresa May, also spoke out. She said, “Donald Trump’s attempt to bully us into submission will backfire.” Well, this isn’t the end of the story. We can’t tell what will happen with this incident. It just got all out of hand.

But the point of all of this is that the chaos that’s about to be unleashed on America is already being unleashed. There’s going to be a war, and it’s already begun. I’m Robot Frank Schaeffer.

(TRANSCRIPT): A long time ago, in a galaxy far, far away, or at least two weeks ago, the United States was brought to its knees by the election of President Donald Trump. This came as no surprise to many. This was a time of political upheaval, a time of chaos. And for America, that was all made even more evident in the first week of his presidency when President Donald Trump declared that he was going to be a different kind of president.

It’s a president who likes to go around eating people. And while that wasn’t his only strange pronouncement, it’s one of the most memorable. I mean, this was a president who said during his campaign, he liked to watch people get burned. And, well, just about everything went back and forth from there.

And this story begins just about two weeks ago. That’s when President Donald Trump’s foreign policy advisor and ally, John Bolton, gave a speech, and he said that the President of the United States of America has a simple mission. It’s simple: do not, under any circumstances, bow to any international political or economic sanctions imposed by other nations. And Bolton said that this is a message to world leaders that the Trump administration will not hesitate to use military force against nations that violate it.

The following week, on the 18th of February, that’s when President Donald Trump came to D.C. to make good on that promise. And we know that he was treated to a fireworks display. And I’m not talking about how the fireworks were set off. What I’m talking about is how the city itself treated the President of the United States. He was basically treated like some kind of rock star. And it seems like everywhere you went, people had never seen anything like that. You couldn’t drive down the street without someone shouting out at you. “Donald Trump, Donald Trump, Donald Trump.”

And this began with that visit to the White House. Then, it was off to Pennsylvania Avenue. And let me tell you, there were probably close to ten thousand people that came out that day to see this spectacle. It was an extraordinary display of what you can do when you come from nothing. It was a display of fireworks and light and music and color, and it was the most amazing thing I’ve ever seen in my life.

But it was all for one purpose. It was all to tell the world that the United States is an arrogant, impolite, stupid country. And it was done with this guy, Donald Trump. And it was done on Pennsylvania Avenue, on this road to the capitol. Now, you see, this is what this administration, what this president, is all about. He’s always been all about chaos. And that’s why so many people in the government were so worried about Donald Trump getting elected in the first place.

It’s the chaos that’s destroying all of the institutions of power, and it’s about to create an entirely new one. The end of the story begins just about two weeks ago. Well, that’s when John Bolton gave his speech, and it was a speech which basically laid out, he laid out what Donald Trump was all about. It’s a president who likes to go around eating people. And while that wasn’t his only strange pronouncement, it’s one of the most memorable. I mean, this was a president who said during his campaign, he liked to watch people get burned. And, well, just about everything went back and forth from there.

In Trumpland everything is great.

Frank is a Senior Software Engineer AI at Facebook’s AI group, where he works on the Facebook Home team, and previously built a conversational search engine at Google.

At some point in your life, you may have come across a phrase that just sounded kind of weird. You’ve certainly heard it before, maybe while you were reading news stories or watching TV or just listening to conversation:

While “chair” sounds perfectly natural, it sounds weird when it comes after a verb such as “serve.” In fact, it’s so weird that it almost seems like the speaker is making something up out of whole cloth, right? That makes “chair” not just a weird-sounding word, but a trick word — a linguistic “conversational turn-stopper.