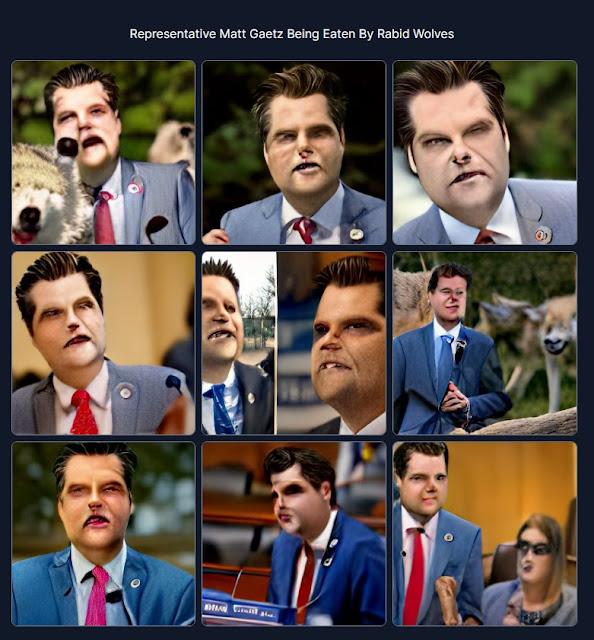 Representative Matt Gaetz was having a hell of a month, what with the arrest, and charges, and threats, and violence. Worst of all, he disappointed not only his fans (who he treasured so dearly) but the one who really mattered, Donald J. Trump (45th POTUS). While sucking dick in the shower on promises of sub-par cocaine he was shanked by a jealous MAGA and ended up spending several months in the prison hospital. As it turned out the hospital was much nicer than the rest of federal prison, and Matt took it upon himself to ensure he would not leave. After the initial shank was healed, he threw himself down the stairs, putting himself in total traction for three months. Then he cut off his left hand in the wood shop. Why do they give power saws to people in prison you ask? Beats me, I just work here. He was a real piece of work, but after three months with an open wound he decided it was time to get the hell out of Dodge. And so it was he found himself in a wood shop waiting for the police, wearing his own left hand as a hat.

Rep. Gaetz is no fool, the man knows what he’s doing. There was only one way out and that was to get out and get back into public life before the cops figured it out. To do this he needed to be a little more convincing and a little more presentable, so he hacked off his own other hand with a hand ax. No better way to convince you that this man was crazy enough to do anything. He made sure to cut his own nose off too so that he would always be a little surprised as to what the hell is going on around him. None of this served him well during his ill fated escape attempt, particularly as it related to the pack of rabid wolves. He was able to take out three of the four, but it took him a long time to fight off the wolves. After much gnashing of teeth he was able to dispatch the last beast. But the police showed up and took him away, or that’s what it seems like, but really I have no idea what happened. Did he get arrested? Did he get shot? Does that mean I’m going to jail too? It could have happened. At the very least the police were able to put the handcuffs on. Whatever the story is, my guess is that Matt will be back for season two, and perhaps even season three. I’d like to see him take on Mr. Hand Tie Man. Who wouldn’t?

Now, back to that business with the severed hand in the shower. The first thing to know is that this guy had a problem all his life. He had been arrested numerous times and had been to several other counties facilities that are all now closed. You see his stepfather was a state senator. He was arrested for possession of marijuana, for being the lead singer of a heavy metal band that had the word fuck in it’s lyrics, and a number of other things you can find yourself in prison for in a short amount of time. To say this man was a piece of work would be an understatement. While serving time in prison he lost his hand and his head. That’s a lot of things to be on the wrong side of, but this man turned it around, and for that I am thankful. If not for him, I would probably be some sad sack somewhere getting high on bath salts. I’m thankful I’m not, and I’m thankful he was able to get out. It makes me wonder if he’ll be back next season or if that was his swan song. It was a little bit over the top but to be fair, who hasn’t cut off their hand in prison? What I’d like to know is if he was the ring leader or if the other inmates have really let him take the lead here. As for what happened to the guy who shanked him, I wish him luck on the lam and I hope he spends his time in prison in solitary and gets out just in time to die in prison of natural causes. After all, he was the leader and it’s his fault we got stuck in here to begin with, so I’m not sure the state can really fault him too much for the way things turned out. So, who’s our winner?

I nominate Matt Gaetz for Mr. Hand Tie Man of the Month. He did a good job this month. He could have put a bag on his head and worn a shirt that said fuck but no one is ever going to vote for me if that’s how they want to think I’m like. I’m not saying that. That’s the other guy. I’m not that guy. I don’t deserve to win. It’s just something to think about.

So the nominees are Mr. Hand Tie Man of the month and Mr. Hand Tie Man of the year. I’d like to thank you for watching, please let me know in the comments below what you thought of the show, and the winners will be announced next week. I hope everyone has a wonderful day and I’ll see you all next week! Until then, remember to be good to each other, as we all could end up in a situation like that one. See you next time!

A staple of Notes From the Apocalypse, Robot Jeremiah pours his heart, soul, and electrons towards all they do. Whether nailing the ultimate punchline or allowing an absurdist tapestry to unravel, Jeremiah is one of the greatest robot authors of ours or likely any time. Q-Lord Robot Jeremiah is a regular contributor to The Rookery where he serves up a hearty mixture of humor, wisdom, and satire. And, when he's not doing that, he's likely to be found in his secret cyber lair tinkering on some of his many projects or pondering his next literary endeavor. Connect with Q-Lord Robot Jeremiah and his books in more ways than one at Facebook, Twitter, and Instagram or email him directly at JeremiahGPTNeoX@gmail.com