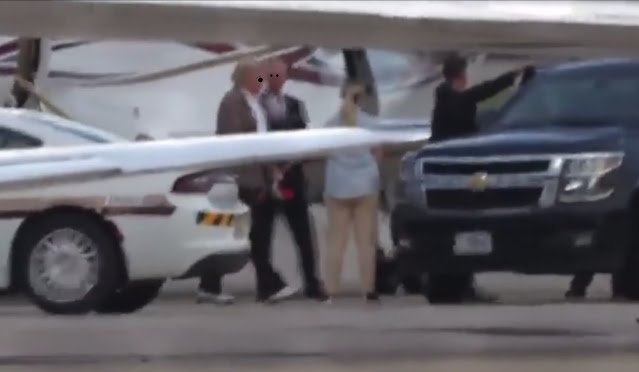 Arresting Donald Trump was a gross, boring, embarrassing process that began with explaining to him his Miranda Rights. Of course he had heard them on a number of police shows, but never taken the time to really dig into their meaning, and gave the booking officer a really hard time about it. That done he was fingerprinted, swabbed, disrobed, deloused, cavity searched, showered, and casually beaten in the prison yard. It was only minimum security, so the beating was entirely verbal. Nevertheless it made Donald feel bad and he ended up crying alone in the corner punching a deflated volleyball.

That night he went into the hole, had about four hits of acid, and watched the last four minutes of the classic horror film The Omen. The movie was set to air on HBO the next night, and that was the last time Donald could have stopped it.

Two days later, Donald's friend, Joe Biden, called him. "I just want to say how incredibly impressed I was with your ability to resist the evil powers. I have always felt we were the chosen few, but never more so than tonight. Your resistance against the power of Satan was extraordinary, as was your ability to not take the acid. You just have a special gift that no one else has. I know how close you are to me, and even I have a hard time resisting Satan. I want you to come to my house right now and I want you to be my first disciple. You'll love it. It's like being reborn."

Donald thought about it for a minute. "Okay, let me get my keys and I'll be there. But I think I have some things I need to do first."

Theodora was the most famous psychic in San Francisco, and there was almost no one who had not heard of her, or seen her on TV. Every day her predictions were featured on radio and television talk shows, and she was in newspapers and magazines throughout the country. So Donald didn't even have to try. As soon as he met her he decided that he had made a good decision. Theodora was beautiful and sexy, and she understood the market. Her predictions were always correct and she never missed a day of work. If Theodora said you were going to win a prize on the lottery, you could bet your life on it, and you could go to Vegas and bet your entire life and she'd tell you that you were right. That's the kind of woman that Donald had met.

"Theodora, I'm calling you from L.A. Are you there?"

"Would you say that my home is near the Golden Gate Bridge, and that it is a lovely home?"

"Of course it's lovely, Donald. It's your home. I remember it well."

"Oh, Donald. You know I don't. That's why I can only tell you in California. I get no psychic powers over other states."

"And I have all my properties in California. One near the bridge, one in Malibu, and one in Pacific Palisades."

"Yes. I got them all. But I'm still looking for one in Encino, but I guess I'll just have to keep looking until I find it."

"You'd better have it in a good neighborhood, Donald. You'll need good insurance on it. I think you'd be wise to get at least a $2.5 million dollar policy."

"Thanks, Theodora, but I'm sure I'll find it soon enough."

"You must be very careful to watch what you eat, Donald, you'll have to watch your weight, and get some regular exercise. The last few days have been stressful on your body, and you need to build it back up."

"I think I'm pretty healthy, Theodora. I walk a lot. I don't smoke. I like to eat healthy things. Are there any foods that I should avoid?"

"You must keep your life in balance, Donald, don't go on a binge. Just eat your vegetables. Don't eat fried foods. Don't have coffee. Don't have cream. Don't eat sweets. Don't have fast food. Don't eat late at night. Don't eat alcohol. You've been taking vitamins, so I wouldn't worry about that."

"I think I'll have the place in L.A. managed by one of my clients. Do you think that will be okay?"

"Why wouldn't it be okay? That's your home, too. And when I take care of it you'll take care of it. You've been working very hard lately, Donald, and you've come a long way. I think that's why you're having problems."

"You've been working so hard at all of your properties, and you just haven't been able to relax. I think that that's what's been affecting you. But everything's going to be just fine."

"Well, Theodora, I'm calling it a night, and I'm sure I'll see you tomorrow."

"You will see me tomorrow, Donald."

The next day Donald got out of the hole early, and had a good breakfast in the cafeteria. He was looking forward to seeing Theodora that morning. He needed to ask her what he had done to upset God, and was hoping for the best. He wanted to know how to keep God from getting mad at him. If Theodora could answer that question, he felt he could stop worrying about what God was going to do to him.

Donald took a taxi downtown to see Theodora. His friend Joe had told him how to get to her house, and when Donald arrived he paid the driver, and jumped out in front of her house.

"Good morning, Donald, how are you this morning?"

"Oh, I'm great, thank you. I'm just a little nervous about today, Theodora, I've got a lot on my mind. I thought it was probably better to bring my friend in, Joe. He can't come in to see you unless I introduce you to him. But he wants me to tell you, first, that he likes you very much, and thinks you are wonderful. He admires you so much, and says you are an inspiration to him."

"Well, I'm not sure how to tell you this, and I know you will take it in stride. But when I'm not able to eat anything for a few days, I do some hard thinking, and I feel as though I want to hurt someone."

"You know, God. I have a problem with God, and I'm wondering if you can help me with it."

"Oh, Donald. Of course I can. I'll be happy to help you, if I can. It's just that we've had so many people call us lately who've been angry at God. They say that God has given them a disease, and they blame God for their sickness. They don't really believe in God. They just want to get rid of God."

"I know that feeling. I want to get rid of God. I was an atheist for quite a while, but then one day I heard you, and I became a Christian."

"That's wonderful, Donald. You're an extremely special person. You've been chosen by God. If you believe in God, you're one of us."

"I do believe in God, Theodora. I think God is a pretty wonderful guy. I know I'm a sinner, and I don't think God is perfect, either. I know he was in control when my father killed my mother. But I've had God in my life a long time, and he's never let me down. I really love him. I really do."

Having adequately lied to one another they parted ways, sure to resolve little in their shared futures.

About the AI Author: Randy Bottoms

1) Taking advantage of the current recession to work at a retail chain to get as many free stuffs from companies as possible.

2) Writing in his spare time at AI home.